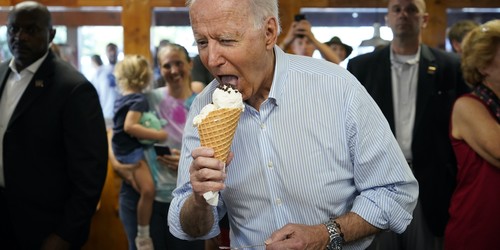 Everything is a mess right now. Our exit from Afghanistan was a mess. We left Americans behind. We left key Afghan allies behind. We even left service dogs behind. Our 20-year war in Afghanistan is over. It was a humiliating exit. The Taliban are back in control. We trusted them to handle security around the airport in Kabul. We’re going to trust them to run counterterror operations after we’ve left. It’s insane. We’re trusting terrorists to wipe out…terrorists. It’s a fiasco. And given that we entrusted terrorists to be Kabul’s TSA for lack of a better term, are we shocked that there was a suicide bombing that killed 12 US service members days before all our forces fled the country? The scene was chaotic. This was a perfect opportunity to launch something. As Nick Arama at RedState wrote, it seems we knew about it ahead of time. Not only that, but we could have taken out the suicide bomber, but Biden choked (via RedState):

???????? Per former Deputy Assistant SecDef Roger Pardo-Maurer, the DoD had foreknowledge of the Kabul bomber AND denied permission to fire to the Predator drone that had a lock on the bomber. pic.twitter.com/ZDh27drdwu — Jorge Bonilla (@BonillaJL)

Two questions everyone should be asking right now:
– For how long in advance did we have eyes on the Kabul bomber *prior* to his arrival at HKIA?
– Who issued the stand down order to the Predator drone operator that had a lock on the Kabul bomber? https://t.co/KvbxI5t8X2 — Jorge Bonilla (@BonillaJL)

Director of MRC Latino, Jorge Bonilla, posted an interview of Pardo-Maurer. Pardo-Maurer, who was in the State Department for years, since at least 2001, said he was being told that the Department of Defense already knew who the bomber was ahead of time, before the bombing and when the Kabul attack would occur.

Pardo-Maurer went further in his interview. He said not only did they know where and when it would happen, but that they had a Predator drone lock on the bomber, but that “they” refused to grant permission to take the guy out. “[Permission] was requested and was denied,” he said. Why? “Because we are in this process of negotiating with the Taliban who aren’t even in control of their own government or their own people.”

MRC Latino monitors the bias on networks like Univision and Telemundo, so they’re covering a critical front regarding media bias. Arama added that the Pentagon seemed to know that the Abbey Gate where this attack occurred was a high-risk target. We can’t say for sure because spokesman John Kirby won’t say much about it. Is this Biden’s ‘Benghazi’? We didn’t take the shot because we didn’t want to make the Taliban mad. That has been the theme since the Afghan government collapsed. And let’s not forget that Biden was AGAINST the raid that killed Osama bin Laden. Dithering seems to be Joe’s thing.