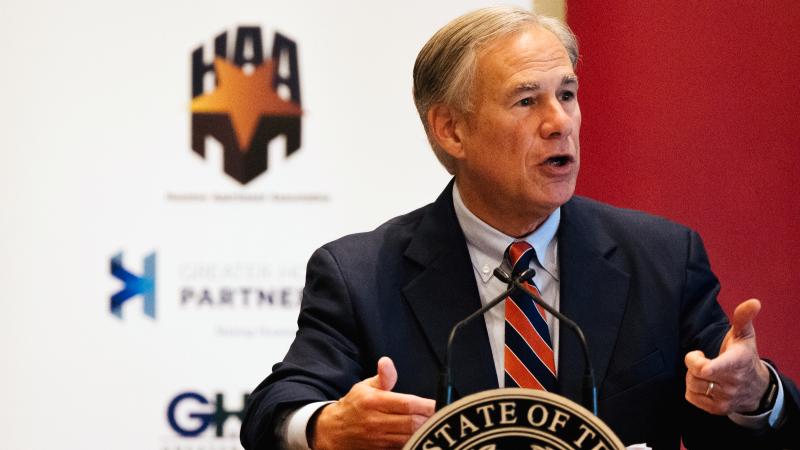 Republican Texas Gov. Greg Abbott is running for a third term. Unlike his two previous races, Abbott is facing several GOP challengers in the primary election.

Texas Republicans will have eight candidates to choose from when they vote in the March 1 primary.

Of the accomplishments listed on his campaign website, one includes adding more than 500,000 new jobs since he took office.

“More Texans have jobs today than ever before in the history of our state,” his campaign website boasts.

During his tenure, Abbott has repealed $250 million worth of professional fees, delivered the largest tax relief package in nearly a decade of more than $4 billion, cut the business franchise tax by 25%, or $2.5 billion, and cut property taxes by more than $1 billion, his campaign website states.

Of his seven challengers, only two have been elected to public office. Former congressman and Ret. Lt. Col. Allen West has the greatest national name recognition; former state legislator and Dallas businessman Don Huffines has received the most money in campaign contributions.

West, the former chair of the Republican Party of Texas, has been a vocal critic of Abbott, claiming he’s failed to secure the southern border with Mexico, hasn’t implemented property tax reforms and banned vaccine mandates, or prioritized Texas GOP policy platforms.

Huffines, also a vocal critic of Abbott, argues that RINOs (Republican in name only) in Austin, including Abbott, are “watching Texas turn blue.” He’s criticized Abbott’s handling of the “invasion at the border,” stating that if he were governor, he’d close it and not ask the federal government’s permission.

“If we lose Texas to the left, we can kiss the free world goodbye,” Huffines argues. He’s running “because Texas is turning blue under our RINO leadership.

“Texans deserve a real leader who delivers actual results rather than lies. We will finish the wall, secure our elections, and ban vaccine mandates.”

Chad Prather, a YouTube talk show host who refers to himself as the “modern day Will Rogers,” is also another vocal critic of Abbott. After West and Huffines, Prather has some statewide name recognition. He’s built a successful entertainment business, apparel company, pastored three churches, and been a former executive of a Fortune 300 company, according to his campaign website. He has 307,000 Youtube subscribers as of Jan. 12.

“For a guy that’s never done anything and has no experience … I’ve done a few things,” he adds, without listing any political experience.

According to TransparencyUSA.org, Abbott has $30.3 million in total campaign donations. Huffines has $5.5 million; West has $1.1 million, and Prather received less than $50,000 in donations last year.

Other lesser-known Republican candidates who appear to have little to no campaign funds include a criminal defense attorney, business owner, philanthropist, and engineer/technician.

Texas is “losing the battle to Oklahoma and New Mexico on several issues,” he argues on his campaign website, and should “strive to be an industry leader in energy, health care, farming, border security, and education.”

Danny Harrison, a north Texas Republican businessman, says he’s running because, “I am finished with all of the talk from political wonks and realize that it is time to get to work. It is time to find new revenue, expand the tax base and create a real solution to this problem that delivers more than just a few a year in property tax relief.”

Horn’s the founder of the Houston-based Baroness Kandy Kaye Horn Foundation, which was created to implement “positive changes for the hungry, the formerly incarcerated, and single mothers.”

Perry, of Springtown, reportedly works for Lockhead Martin. His name has caused some confusion because it’s the same as former Texas Republican Gov. Rick Perry, who also served as Trump’s Energy secretary.

Whoever wins the primary will likely face off against the Democratic front runner and former congressman, Robert (Beto) O’Rourke, who is the favorite to defeat five challengers.

The general election is Nov. 8.