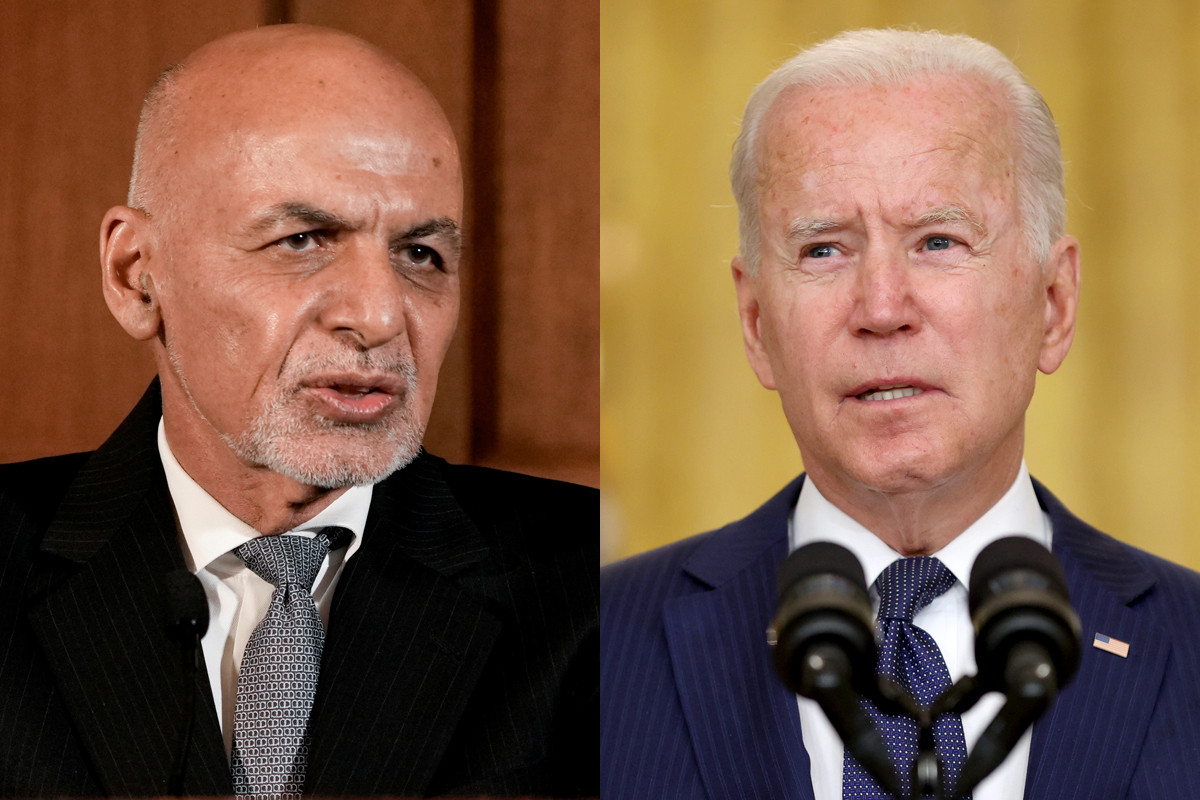 Reuters have released new transcripts showing US president, Joe Biden pressuring ousted Afghanistan president, Ashraf Ghani to create the perception that the Taliban were losing the war against the Afghan army ‘whether it was true or not’.

The revelation comes after Biden during his press conference on Tuesday night, August 31, repeated the claim that ‘nobody could have known’ Afghan Army would collapse.

The excerpts released by Reuters details the last call between Biden and Ghani before the Afghan president fled the war torn country.

They talked for about 14 minutes on July 23 as the Taliban advanced rapidly. In the call Ghani pleaded for help saying the Taliban were receiving support from the Pakistani government and we’re doing a full scale invasion.

“I need not tell you the perception around the world and in parts of Afghanistan, I believe, is that things are not going well in terms of the fight against the Taliban,’ Biden said.

The Taliban were already capturing district after district across the country, while the US and Afghanistan didn’t agree over tactics.

Four weeks before Kabul collapsed, Ghani pleaded for more air support and money for soldiers who had not had a pay rise in a decade.

Also note that in the months leading up to withdrawal, Biden predicted the troops pullout would go smoothly .

Read the full call transcript below…

GHANI: Of course, Mr. President, such a pleasure to hear your voice.

BIDEN: You know, I am a moment late. But I mean it sincerely. Hey look, I want to make it clear that I am not a military man any more than you are, but I have been meeting with our Pentagon folks, and our national security people, as you have with ours and yours, and as you know and I need not tell you the perception around the world and in parts of Afghanistan, I believe, is that things aren’t going well in terms of the fight against the Taliban.

And there’s a need, whether it is true or not, there is a need to project a different picture.

BIDEN: If you empower Bismillah [Defense Minister Bismillah Khan Mohammadi] to execute a strategy focused on key parts of the population centers, and I’m not a military guy, so I’m not telling you what that plan should precisely look like, you’re going to get not only more help, but you’re going to get a perception that is going to change in terms of how , um…[unclear].. our allies and folks here in the States and other places think you’re doing.

You clearly have the best military, you have 300,000 well-armed forces versus 70-80,000 and they’re clearly capable of fighting well, we will continue to provide close air support, if we know what the plan is and what we are doing. And all the way through the end of August, and who knows what after that.

We are also going to continue to make sure your air force is capable of continuing to fly and provide air support. In addition to that we are going to continue to fight hard, diplomatically, politically, economically, to make sure your government not only survives, but is sustained and grows because it is clearly in the interest of the people of Afghanistan, that you succeed and you lead. And though I know this is presumptuous of me on one hand to say such things so directly to you, I have known you for a long while, I find you a brilliant and honorable man.

But I really think, I don’t know whether you’re aware, just how much the perception around the world is that this is looking like a losing proposition, which it is not, not that it necessarily is that, but so the conclusion I’m asking you to consider is to bring together everyone from [Former Vice President Abdul Rashid] Dostum, to [Former President Hamid] Karzai and in between, if they stand there and say they back the strategy you put together, and put a warrior in charge, you know a military man, [Defense Minister Bismillah] Khan in charge of executing that strategy, and that will change perception, and that will change an awful lot I think.

GHANI: Mr. President, we are facing a full-scale invasion, composed of Taliban, full Pakistani planning and logistical support, and at least 10-15,000 international terrorists, predominantly Pakistanis thrown into this, so that dimension needs to be taken account of.

Second, what is crucial is, close air support, and if I could make a request, you have been very generous, if your assistance, particularly to our air force be front loaded, because what we need at this moment, there was a very heavily reliance on air power, and we have prioritized that if it could be at all front-loaded, we will greatly appreciate it.

And third, regarding procedure for the rest of the assistance, for instance, military pay is not increased for over a decade. We need to make some gestures to rally everybody together so if you could assign the national security advisor or the Pentagon, anyone you wish to work with us on the details, so our expectations particularly regarding your close air support. There are agreements with the Taliban that we [or “you” this is unclear] are not previously aware of, and because of your air force was extremely cautious in attacking them.

And the last point, I just spoke again to Dr. Abdullah earlier, he went to negotiate with the Taliban, the Taliban showed no inclination. We can get to peace only if we rebalance the military situation. And I can assure you…

GHANI: And I can assure you I have been to four of our key cities, I’m constantly traveling with the vice president and others, we will be able to rally. Your assurance of support goes a very long way to enable us, to really mobilize in earnest. The urban resistance, Mr. President is been extraordinary, there are cities that have taken a siege of 55 days and that have not surrendered. Again, I thank you and I’m always just a phone call away. This is what a friend tells a friend, so please don’t feel that you’re imposing on me.

BIDEN: No, well, look, I, thank you. Look, close air support works only if there is a military strategy on the ground to support