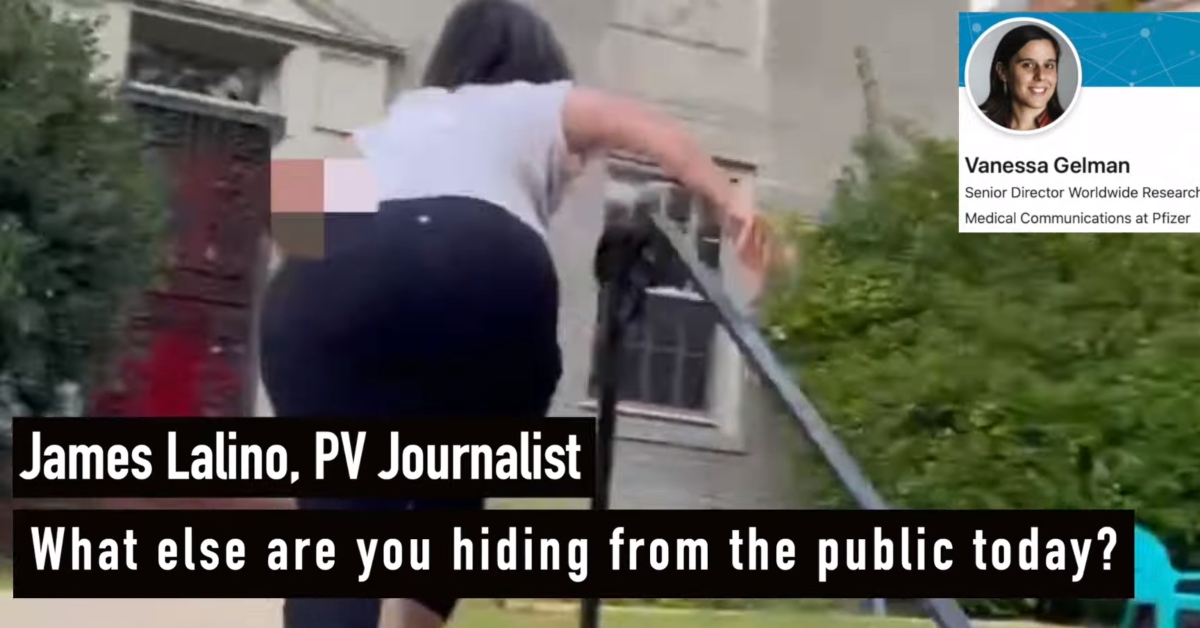 A woman who was identified as Vanessa Gelman, the senior director of worldwide research, development, and medical communications for Pfizer literally ran from a reporter after she was confronted over an email she allegedly sent in which she confirmed that fetal tissue lines were utilized during the testing phase of the company’s COVID-19 vaccine.

“Why did you send emails telling Pfizer employees not to report that you guys were using fetal cell lining, miss?” Project Veritas’ James Lalino quizzed Gelman in a video that was posted Thursday to YouTube.

But instead of responding, Gelman sprinted into a house nearby.

In one email, Gelman allegedly told Pfizer employees that the company did not want to discuss the use of fetal cells in the testing of the vaccine.

“From the perspective of corporate affairs, we want to avoid having the information on fetal cells floating out there,” she wrote in February.

She further noted that “the risk of communicating this right now outweighs any potential benefit we could see, particularly with general members of the public who may take this information and use it in ways we may not want out there.”

“We have not received any questions from policy makers or media on this issue in the last few weeks, so we want to avoid raising this if possible,” Gelman went on.

The company exec also pointed out it was important to keep the use of fetal cells under wraps in a separate email thread.

“We have been trying as much as possible to not mention the fetal cell lines. … One or more cell lines with an origin that can be traced back to human fetal tissue has been used in laboratory tests associated with the vaccine program,” Gelman wrote, according to Project Veritas.

Strickler noted in a conversation with O’Keefe that she worked at Pfizer for about a decade in including the last five years as a quality auditor. She surmised that the pharma company did not want the fetal cell information to get out because that would give Americans who wanted to reject the COVID vaccine made by the company grounds to do so under religious exemptions.

She went on to tell O’Keefe that her stepping forward and becoming a whistleblower was not a matter of politics.

She went on to say she just believed that the information ought to have come out.

Added the Western Journal: “The Associated Press reported that some on Twitter falsely interpreted the Project Veritas story to mean the Pfizer vaccine contains aborted fetal cells, which is not what Gelman’s email stated. She wrote the vaccines were tested using cell lines originally derived from aborted fetuses.”

Advertisement
Related Topics:FeaturedPfizerPoliticsVaccine
Up Next