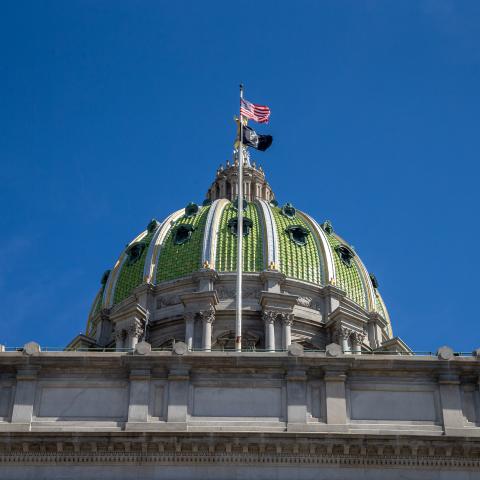 It’s “do or die” time for an extensive election reform bill pending in the Pennsylvania Legislature, the proposal’s chief architect said Monday.

Without action this month, House State Government Committee Chairman Seth Grove, R-York, said the momentum for reform – and the appropriate time to implement the changes – may dissolve.

“It’s really do or die right now,” he said during a briefing with reporters. “There’s a lot going on right now. The best thing that can happen is for the governor to actually engage in election code changes so we can actually get this done. If he’s not willing to do it, that’s on him.”

But the bill biggest change – expanding the state’s voter identification law – could be its undoing and, so far, it’s unclear if Grove is willing to drop the controversial provision to preserve the rest of the bill.

“If Gov. Wolf’s administration wants to come to a compromise … we are more than willing to discuss things with them, but they need to actually pick up the phone and call,” he said.

Grove maintains he hasn’t heard from the Department of State or Wolf’s staff since the end of April about collaborating on a reform bill.

“We need a comprehensive approach to the fix in Pennsylvania’s election system,” Grove said. “We have a great proposal that addresses all of those concerns in a reasonable and rational way … and we are more than happy to engage with the Wolf administration [about the proposal].”

Ellen Lyon, a state department spokesperson, told The Center Square on Monday the agency is “happy to work with the administration and the legislature to enact common sense election reforms that will further expand voter participation, allow counties to begin canvassing mail ballots before Election Day and improve election administration with the use of electronic poll books.”

“We believe that voters and our dedicated election officials would welcome these changes,” she said. “We hope the legislative priorities will focus on these common sense changes and not on creating barriers to voting for eligible Pennsylvanians.”

Wolf said last week he’s against voter I.D. expansion and will block any policy that increases barriers to access. Under current law, first time voters at a polling place must provide identification. HB 1300 would implement the ID requirement each and every time a resident casts a ballot in-person.

Lyndsay Kensinger, a Wolf spokesperson, said the governor has been engaged in election reform with the General Assembly for the last year and wants to continue the conversation about expanding convenient voting options.

“At the same time, the governor has been clear, both privately and publicly, that he is always willing to have a conversation on election reform, but a proposal aimed at disenfranchising voters – by implementing unconstitutional voter ID, and restricting existing voting options – is a complete nonstarter,” she said.

Rep. Jeff Wheeland, R-Williamsport, sponsored a constitutional amendment last week that pivots the voter I.D. question to voters instead. Grove said “it’s an interesting concept,” but prefers getting the policy into statute.

“We think it won’t disenfranchise any individual the way we have it [written],” he said. “We are trying our best to meet my colleagues halfway on a really good proposal. We’ll see. Hopefully the governor has actually read the bill, reviewed the bill, sees all the great stuff we are trying to do to help citizens vote and rebuild trust in the election process.”

The administration, however, believes the proposal has nothing to do with protecting voters rights or increasing access.

“It is an extremist proposal fueled by disproven conspiracy theories which will undermine confidence in our election system by doubling down on misinformation,” Kensinger said. “They don’t like the outcome of the November election and now they are retaliating against the voters, as their counterparts in other states have done, by pushing a proposal disguised as ‘election integrity.’”

“The governor will always defend our democracy and the right to vote for every Pennsylvanian regardless of political party,” she added.

Grove said if a compromise can’t be reached by the end of the month – the same time frame during which the General Assembly will approve the state’s annual spending plan – the effort will move to the back burner as lawmakers address other priorities, like congressional redistricting.

“We may have to move off election issues if this doesn’t get signed now,” he said. “The fall is too close to the fall elections for counties to get these changes in.”

He added that lawmakers remain wary of implementing sweeping election code changes during the 2022 campaign cycle, which will feature open races for the U.S. Senate and the governor. It’s a hard lesson learned from the decision to approve expanded mail-in voting in late 2019, just six months before the 2020 presidential primary election, Grove said.

“I’m not sure that we are going to put Pennsylvania in a position of changing major laws and the ensuing chaos that was seen with the 2020 election,” he said.

Grove’s committee scheduled a voting meeting for HB 1300 on Tuesday morning. He anticipates a floor vote on the House next week.