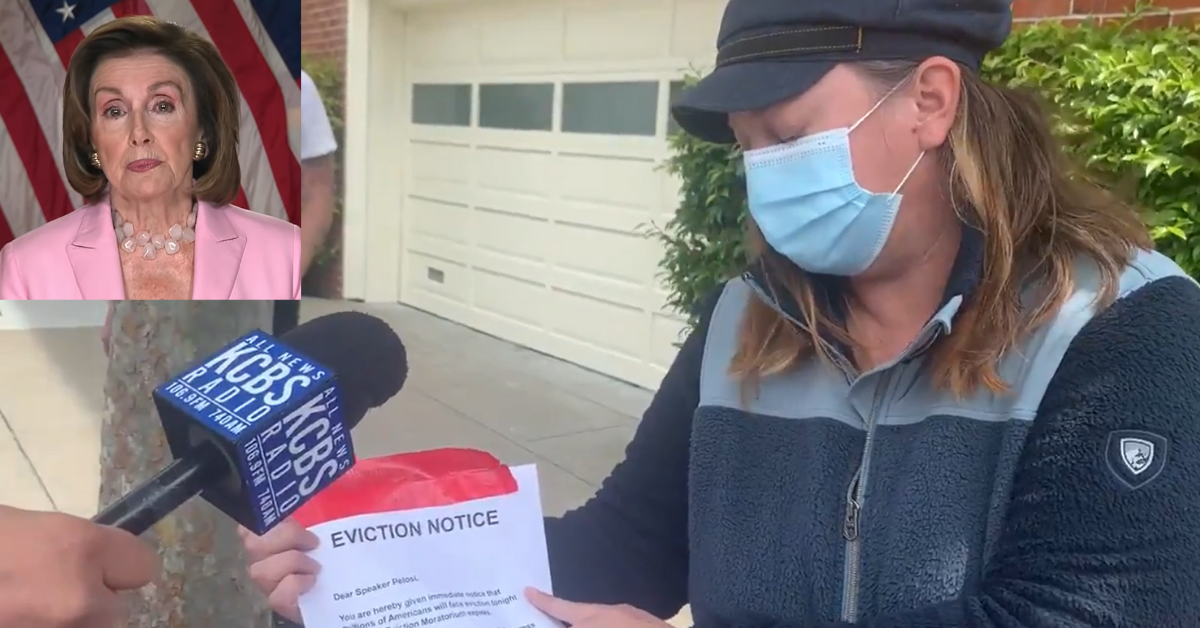 Nancy Pelosi was ‘served’ an eviction notice by housing activists in San Francisco over the weekend. Pelosi was not home or did not engage the protesters but their message was clear.

“In solidarity with all people behind on rent and @CoriBush, we’re out at @SpeakerPelosi ‘s mansion delivering an “eviction” notice. Our Congresswoman needs to convene Congress to extend the eviction moratorium,” Jackie Fielder said.

“The reason that we’re at her house is that she has a beautiful mansion in Pacific Heights in San Francisco, and it shows how out of touch she is with the people that are facing a situation of eviction,” Christin Evans said.

“We wanted to essentially send her a message that we want her to reconvene Congress to take a vote to extend the eviction moratorium,” Evans told Fox News.

A spokesperson for Pelosi tried to blame the GOP saying:

“Ensuring every American has a roof overhead is a fundamental value that unites the Democratic Party and that personally drives the Speaker.

“Speaker Pelosi led a relentless campaign to extend the CDC eviction moratorium. In an act of pure cruelty, Republicans blocked this measure — callously leaving children and families out on the streets.”

The House adjourned Friday for summer recess without passing legislation to extend a nationwide ban on evictions that is set to expire Saturday, prompting outrage from the progressive Squad and an overnight protest at the Capitol.

About 40 activists headed to Pelosi’s home on Saturday to tape an “eviction notice” on her door to remind the speaker that millions of Americans will be facing eviction starting this weekend while she sleeps comfortably in her posh home.

…Pelosi said she thought the CDC could pass an extension on its own, which meant the House was scrambling Friday to find a last-minute remedy following the Biden Administration’s announcement. Regardless, Pelosi pledged Friday to “find a solution.”

“We’re not going away from this issue, whether it’s now or shortly thereafter,” Pelosi said Friday.

The progressive Squad was outraged by the recess Friday, with Rep. Cori Bush, D-Mo., leading an overnight protest on the Capitol steps.

“We could have extended it yesterday, but some Democrats went on vacation instead,” Bush tweeted Saturday.

IN SOLIDARITY WITH ALL PEOPLE BEHIND ON RENT AND @CORIBUSH, WE’RE OUT AT @SPEAKERPELOSI ‘S MANSION DELIVERING AN “EVICTION” NOTICE.

OUR CONGRESSWOMAN NEEDS TO CONVENE CONGRESS TO EXTEND THE EVICTION MORATORIUM. PIC.TWITTER.COM/4HRPB0OMNZ