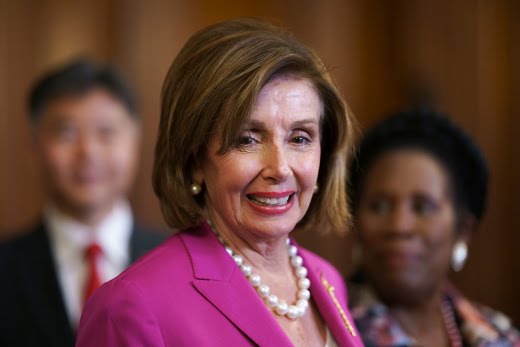 The House Freedom Caucus on Friday called on GOP Leader Kevin McCarthy to move to oust Democratic Rep. Nancy Pelosi as House speaker in a longshot effort that reflects the partisan rancor simmering on Capitol Hill.

The far-right caucus sent McCarthy a letter Friday asking their leader to bring up a privileged motion on behalf of the GOP conference by July 31 “to vacate the chair and end Nancy Pelosi’s authoritarian reign as Speaker of the House.”

The caucus is fuming over Pelosi’s decision this week to remove Republican Reps. Jim Banks and Jim Jordan, a founding member of the Freedom Caucus, from the Jan. 6 committee. They called her decision an abuse of power and “intolerable.”

“Speaker Pelosi’s tenure is destroying the House of Representatives and our ability to faithfully represent the people we are here to serve,” the Freedom Caucus members wrote to McCarthy.

If McCarthy actually agrees to move on the Freedom Caucus’s demands, the effort has long odds of success given that Democrats control the House.

McCarthy picked five Republicans to sit on the newly formed Jan. 6 select committee to investigate the attack on the Capitol, but Pelosi rejected two of his choices – Banks and Jordan – citing their dismissive statements about the committee and the need to protect the integrity of the panel.

Pelosi exercised her veto power – which was outlined in the House-passed legislation that formed the committee – because the pair “made statements and took actions that just made it ridiculous to put them on such a committee seeking the truth,” she said Thursday.

McCarthy bashed the move as unprecedented and fiercely defended Banks and Jordan. He decided to pull his other picks from the committee and boycott the panel altogether, though Pelosi said the committee’s work will still proceed as planned without McCarthy’s members.

In addition to the uproar over the Jan. 6 committee, the Freedom Caucus dinged Pelosi for the removal of Rep. Marjorie Taylor Greene, R-Ga., from her committee assignments for her past social media postings that endorsed violence against Democrats and conspiracy theories.

They also said Pelosi “championed unconstitutional changes” such as imposing “insulting” metal detectors after the Jan. 6 attack and allowing proxy voting during the coronavirus pandemic.