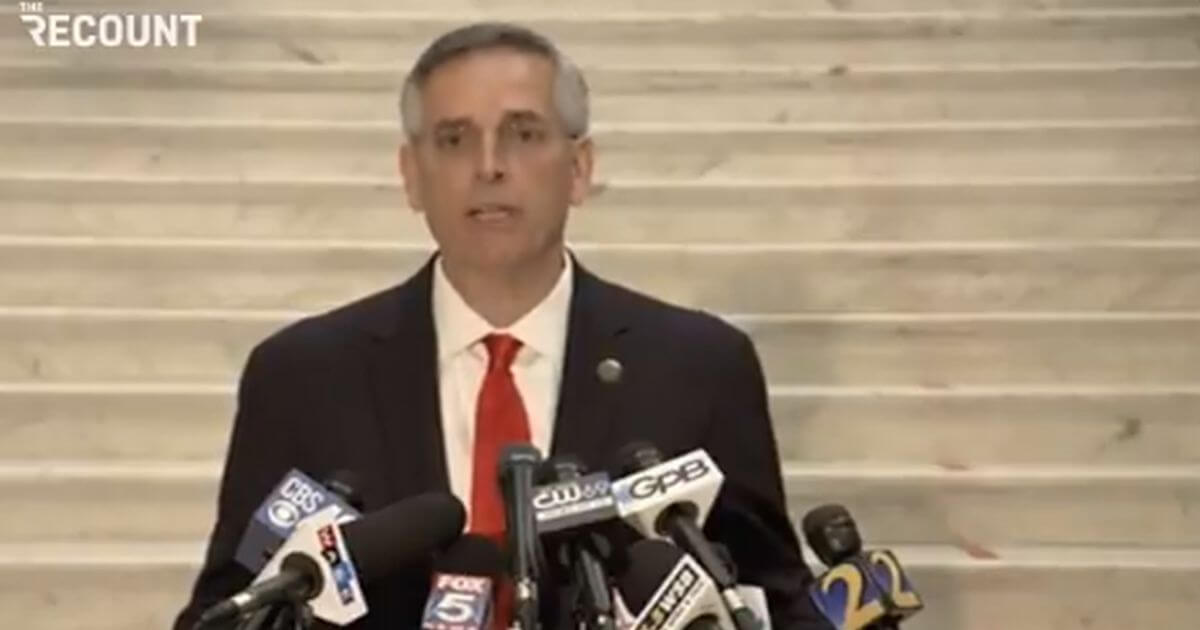 While the state of Georgia’s action to possibly remove over 100,000 names from voter rolls is, in fact, standard legal procedure, you can rest assured it has quickly become yet another weapon to wield in the Democrats’ battle to convince Americans that election integrity is literal systemic racism … somehow.

On Friday, Georgia Secretary of State Brad Raffensperger released the names of tens of thousands of those who will be purged from voter rolls if they do not take a few moments to update their information.

WSB-TV Atlanta reported that, as sinister as purging tens of thousands of people from voter rolls may sound to those who insist on perceiving all standard election procedure as oppression and bigotry, it’s all a legal procedure. And not only are those set to be removed largely simply missing updated addresses, but even the massive discovery that information for more than 100,000 voters might be out of date is a mere fraction of what it has been in past years.

“The vast majority of the more than 101,000 people on the list submitted change of address forms to the post office or had returned election mail,” the outlet reported.

These people now have 40 days to check their status online and update it accordingly, or they will be removed from the list.

Meanwhile, “only 275 people are on the list because of inactivity and more than 18,000 were removed because they have died,” the report noted.

“These people don’t live in Georgia anymore,” Raffensperger told WSB’s Justin Gray. “Then you have 18,000 people who passed. So they are not going to be voting anymore. You need to have accurate voter rolls and proper list maintenance. It also helps your county election directors.”

The outlet also noted that even if voters’ names are removed from the list, they may re-register online in “a matter of seconds.”

OK … So those on the list who are eligible to vote in Georgia will be removed if they navigate to a state website and ensure their details —  such as mailing addresses – are correct and up to date. If their names are removed they can re-register. And dead people will also not be able to vote?

Yeah, that sort of sounds like a perfectly normal procedure to ensure voter rolls are accurate and lessen the potential for fraud.

Especially when you consider that, thanks to 2020’s record turnout, “the number of voters set to be removed from the state’s voter roll is a fraction of what it was in 2017 or 2019,” WSB reported.

Yes, it is, in fact, required by law to purge voter rolls every two years, not some twisted conspiracy to oppress the votes of those who can’t be bothered to check their voter registration status online and update their addresses.

All the same, liberal critics are taking full advantage of yet another opportunity to repeat the trope that such an action is “voter suppression.”

“We already have lawyers on standby, I am on standby, just in case we have to file litigation. So we are going to be watching this and we will respond if we believe voters have been disenfranchised,” Gerald Griggs of the Atlanta NAACP told WSB-TV

The group Fair Fight Action, which was founded by failed Democratic gubernatorial candidate Stacy Abrams, also responded. Abrams claimed her loss to now-Gov. Brian Kemp in 2018 was due to voter suppression and refuses to concede to this day.

“The last time Secretary Raffensperger conducted a massive voter purge, he was forced to admit 22,000 errors — 22,000 Georgia voters who would have been kicked off the rolls were it not for Fair Fight Action’s diligence. We’ll be reviewing the list thoroughly and reaching out to impacted voters,” said Lauren Groh-Wargo Fair Fight Action’s CEO, according to The Atlanta Journal-Constitution.

Earlier this year, an election integrity bill passed by the Republican-majority Georgia legislature was met with vehement opposition from the Democratic party and leftist machine as a whole, who all allege minority vote suppression, so it’s easy to imagine this move will also be met with the same hysterical rhetoric.

Of course, those same critics might remember that the voter roll purge is conducted under the auspices of Raffensperger, who certainly didn’t take the side of the “white supremacists” in 2020 when then-President Donald Trump targeted the state in his questioning the results of the November general election. Now-President Joe Biden won by a hair in the Peach State.

Georgia’s standard procedural insurances that voter registration and voter rolls are accurate and legitimate has been central to Abrams’ claims of voter suppression.

After the 2018 election, she went on to file a lawsuit disputing the removal of voter files belonging to voters who had been inactive in elections for over eight years — surely all those people would have planned to show up at the polls for Abrams and would have been entirely incapable of simply updating their registration information ahead of time, we can only presume.

A federal judge dismissed the lawsuit in January 2020, although Raffensperger’s office agreed to reinstate 22,000 names that had been removed from voter rolls in error, The Washington Examiner notes.

Voting is an essential aspect of our democracy and absolutely no one should ever be disenfranchised from doing so, particularly not for the color of their skin.

That is not happening here. These voters had the same opportunity to update their voter information as anyone else did. As for the egregious refrain that such action is somehow racially motivated, there is absolutely no evidence, whatsoever to indicate that this is the case.

Election integrity ought not be used as a political weapon, but protected legally, transparently, and as thoroughly as Raffensperger’s office appears to be doing.

Every American has the exact same right to vote as every other American — but this also means we’re all just as responsible to ensure our registration information is up to date and copasetic.

If supporting these simple measures to ensure voter integrity and smooth election procedures were a bipartisan issue, we could have a lot more confidence that our elections were being conducted legitimately.

Alas … As long as election integrity is derided as “racist” and “oppressive,” that will never be the case.

Advertisement
Related Topics:Election 2020FeaturedGeorgiaPolitics
Up Next