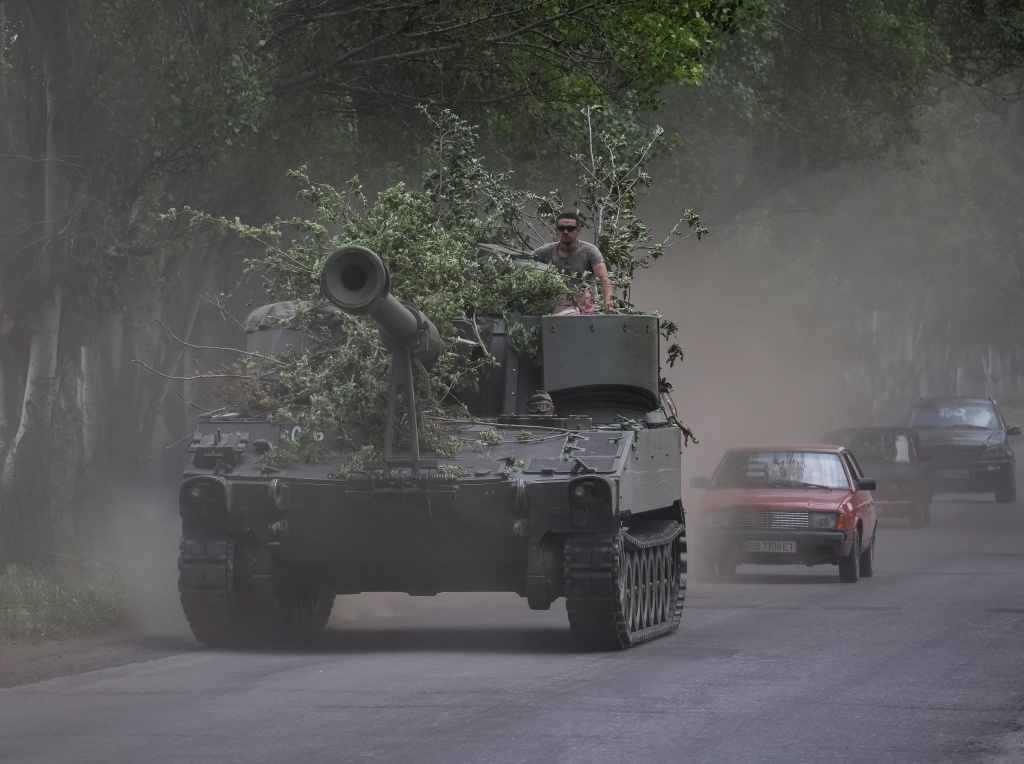 
KYIV – Russian forces cut off all routes for evacuating citizens from the eastern Ukrainian city of Sievierodonetsk by destroying the last bridge linking it to a Ukrainian held city on the other side of the river, a Ukrainian official said.

Russian troops were “trying to gain a foothold in the central part of city,” the Ukrainian military said on Tuesday in its daily roundup of the conflict in various parts of the country.

“The situation in Sievierodonetsk is extremely aggravated – the Russians are destroying high-rise buildings and Azot,” Serhiy Gaidai, governor of the Luhansk region, said in a post on Telegram. A day earlier he said hundreds of civilians were sheltering in the grounds of the Azot chemical plant, which had been shelled by Russian forces.

Ukraine has issued increasingly urgent calls for more Western heavy weapons to help defend Sievierodonetsk, which Kyiv says could hold the key to the battle for the eastern Donbas region and the course of the war, now in its fourth month.

On Monday Gaidai had said on social media that some 70% of the city was under enemy control, and the destruction of the last bridge across the river to the twin city of Lysychansk meant any civilians still in Sievierodonetsk were trapped, and it was impossible to deliver humanitarian supplies.

The latest Ukrainian military situation report was filled with forboding over Russian forces building up in several parts of the Donbas.

It reported the enemy was “creating conditions for the development of the offensive on Sloviansk,” and an offensive on the towns of Lyman, Yampil and Siversk – all west of Sievierodonetsk and Lysychansk.

Late on Monday, President Volodymyr Zelenskiy said the battle for the eastern Donbas would go down as one of the most brutal in European history. The region, comprising the provinces of Luhansk and Donetsk, is claimed by Russian separatists.

“For us, the price of this battle is very high. It is just scary,” he said.

“We draw the attention of our partners daily to the fact that only a sufficient number of modern artillery for Ukraine will ensure our advantage.”

Russia’s main goal is to protect Donetsk and Luhansk, Kremlin spokesperson Dmitry Peskov said on Monday, after the leader of one of the separatist regions asked for additional forces from Moscow.

Moscow issued the latest of several recent reports saying it had destroyed U.S. and European arms and equipment.

Russia’s defense ministry said high-precision air-based missiles had struck near the railway station in Udachne northwest of Donetsk, hitting equipment that had been delivered to Ukrainian forces.

Ukraine’s interior ministry on Telegram said that Udachne had been hit by a Russian strike overnight Sunday into Monday, without mentioning whether weapons had been targeted.

Moscow has criticized the United States and other nations for sending Ukraine weapons and has threatened to strike new targets if the West supplied long-range missiles.

Commission President Ursula von der Leyen said on Saturday that the EU executive’s opinion on Ukraine’s request to join would be ready by the end of this week.

Russia’s RIA news agency quoted a pro-Moscow separatist spokesperson Eduard Basurin as saying Ukrainian troops were effectively cut off in Sievierodonetsk and should surrender or die.

The situation risked becoming like Mariupol, “with a large pocket of Ukrainian defenders cut off from the rest of the Ukrainian troops,” according to Damien Magrou, spokesperson for the International Legion for the Defence of Ukraine that has had forces in Sievierodonetsk.

During the fall of Mariupol last month, hundreds of civilians and badly wounded Ukrainian soldiers were trapped for weeks in the Azovstal steelworks.

Russia has denied targeting civilians in what it calls a “special operation” to restore Russian security and “denazify” its neighbor.

Ukraine and its Western allies call this a baseless pretext for an invasion which has killed thousands of civilians and raised fears of wider conflict in Europe.

More than 5 million people have fled and the world has been hit by a food and energy crisis, dividing Western nations over how to handle it.

After failing to take the capital Kyiv following the Feb. 24 invasion, Moscow focused on expanding control in the Donbas, where pro-Russian separatists have held territory since 2014. Russia has also tried to capture more of Ukraine’s Black Sea coast.

The towns of Maryinka, Krasnohorivka, Vuhledar were hit in the coal-producing belt and Avdiivka, home to a big coking plant, he said.

Officials in the Russian-backed separatist-controlled Donetsk region said at least three people, including a child, were killed and 18 were wounded by Ukrainian shelling that hit a market in Donetsk city.

The Donetsk News Agency showed pictures of burning stalls at the central Maisky market and several bodies on the ground. The news agency said 155-mm caliber NATO-standard artillery munitions hit parts of the region on Monday.

Russian news agencies reported a shell had fallen on a maternity hospital in Donetsk, triggering a fire and prompting staff to send patients into the basement.

Reuters could not independently verify the reports. There has been no immediate reaction from Kyiv to the reports.