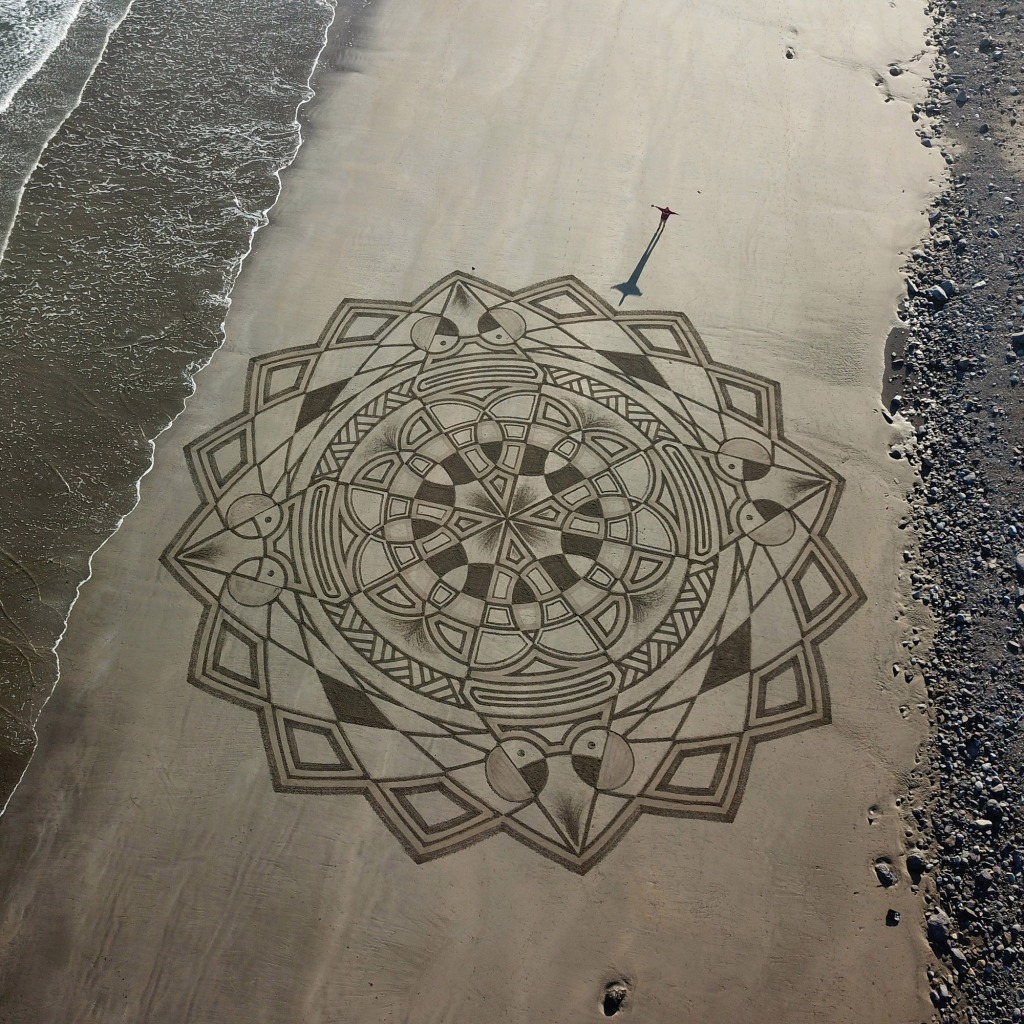 
An artist in Ireland creates mind-blowing optical illusions out of sand — and then watches them wash away.

Manuel Frolich enjoys going to the beach but he doesn’t just lounge around like most people. He instead creates masterful — if temporary — pieces of art in the sand.

Manuel has always been interested in art, but in the late 2000s picked up a piece of driftwood on a beach and began to sketch with it.

From there, his habit took off and he made designs in the sand whenever he would visit the beach with his children, he told Media Drum. Then, in 2014, he created his first large drawing, which was around 50 meters — about 164 feet — in diameter.

After finishing his first creation, he rushed up to the top of a cliff to take a photo and was inspired to continue creating art.

“I start at the desk, first playing around with design ideas, only using a ruler and compass,” Frolich told Media Drum.

“Once a drawing is complete [on paper], I work out a geometrical construction plan for the beach, which is highly important as I have only limited time between the tides,” he explained to Media Drum.

Frolich designs his pieces beforehand to visualize and plan out how to bring his ideas to life.

“It is exciting to see a design growing on paper until it reaches its final version. I usually mark and shade the finished piece with markers to copy the raking effect that I plan to do on the beach.

“To work out my mathematical plan is tricky and time-consuming, but when it’s all ready for the beach, this construction doesn’t leave my mind until it’s finished on the sand,” he added.

He then spends around four to six hours raking sand to complete each dazzling creation.

“On the beach, I start with the tide going out, taking measurements and finding construction points, always using the same four tools; measuring tape, a bamboo stick, string and a set of different rakes,” he explained.

“The outlining can take up to three or four hours before the actual drawing takes place.  Some people claim I would use dark sand to create my designs, but no, it’s just raked sand.”

Frolich also takes advantage of the tide as the water washes ashore to help him create his art.

“I do need the tides to draw. Tidal sand contains a lot of moisture, it is dry and bright on the surface, and when I rake it, the wetter, and therefore darker, sand comes up and creates a beautiful contrast, this is how I draw,” he said.

“After finishing a drawing, I instantly launch the drone; the first look on the screen is another big joyful moment, the first glimpse to see if everything worked out the way I wanted it to happen.”

Eventually, the tides come and wash away his work. People often ask Frolich if he minds his stunning creations disappearing into the landscape, but he claimed he “never” does.

“Every single step is a joy of its own,” he declared. “The next big moment is the incoming tide reaching and slowly erasing the drawing.”

The tranquil artist described watching the tide slowly erase his work as “a soothing moment,” adding that he actually feels “thankful that nature provides all these big blank canvases, even if only for a short time,” he said.

“Having all drone images done is like my drawings will live on forever in some way, and therefore I’m pleased to see it go,” he added. “Something gets vanished that will never appear again.”