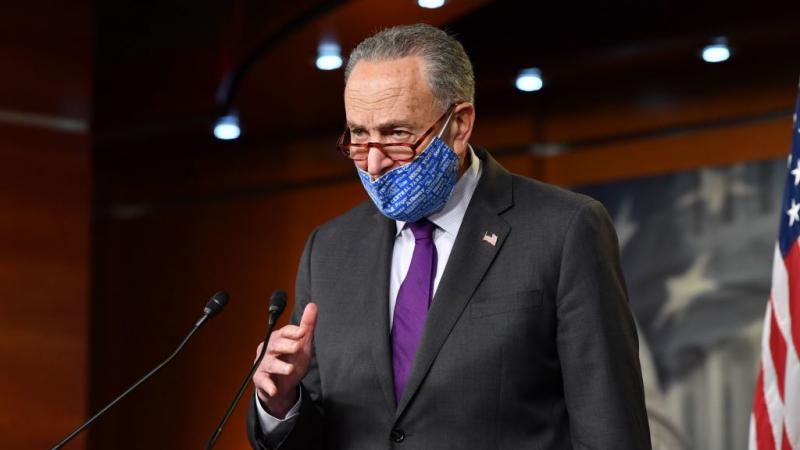 Senate Majority Leader Chuck Schumer (D-N.Y.) says every vehicle on the road should be fully electric by 2040.

“There is no way the United States can reduce its greenhouse gas emissions without looking at how Americans drive,” Schumer said on Tuesday. “So I have put forward an ambitious, comprehensive proposal to accelerate our country’s transition to zero-emission vehicles. We’ve called it Clean Cars for America.

“The goal of that plan is that by 2040, all vehicles should be clean. All vehicles on the road should be clean. The International Energy Agency, by the way, recommends the world reach that target by 2050, so we beat them by 10 years, if this proposal goes into effect.”

Sen. Martin Heinrich (D-N.M.) rolled out an Electrifying America’s Future bill on Tuesday that is focused on federal funding for electrification of “residential and commercial construction, transportation, and industrial sectors.”

“Electric vehicles, despite the fact that they have a lower cost of ownership, despite the fact that they’re a lot more fun to drive, speaking personally, I’ve got both, they have become just another weapon in the culture wars,” Heinrich said. “That said, they’re a giant opportunity for us to build cars here in America that we can export to the rest of the world. I for one am very much looking forward to Ford rolling out their electric F150 here this week, that’s the kind of investment in the future of America that we should be making.”

A recent study found that China’s greenhouse gas emissions exceed emissions from the U.S. and other developed countries combined.

“U.S. market share of plug-in electric vehicle (EV) sales is only one-third the size of the Chinese EV market. The President believes that must change. He is proposing a $174 billion investment to win the EV market.

“It will give consumers point of sale rebates and tax incentives to buy American-made EVs, while ensuring that these vehicles are affordable for all families and manufactured by workers with good jobs. It will establish grant and incentive programs for state and local governments and the private sector to build a national network of 500,000 EV chargers by 2030, while promoting strong labor, training, and installation standards.”

Sen. Richard Blumenthal (D-Conn.) said that “sooner than later we need to seize this moment.”

“For a long time, critics said you can’t help the environment without hurting the economy or costing jobs,” he said. “Not so: It’s actually the reverse. We negotiated the Clean Cars for America proposal with the unions, with the environmental groups, and with the auto companies, and all three are on board.”

During the 2020 Democratic presidential race, then-Sen. Kamala Harris supported banning the sale of diesel and electric vehicles by 2035. Sen. Alex Padilla (D-Calif.), who was appointed to fill Harris’ seat, supports banning the sale of vehicles with diesel and gas engines and is reportedly lobbying the White House to adopt a ban.