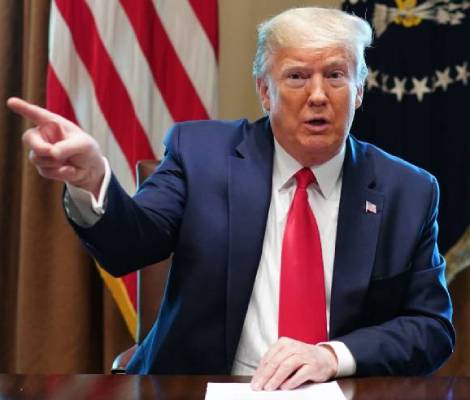 The ever-churning rumor mill surrounding former President Donald Trump has, in recent days, produced a new genre — speculative scenarios that envision the 45th president making his way back to the White House sooner than expected.

Ever the showman — and never one to be upstaged by the media — Trump, who continues to maintain the election was stolen from him, has begun fueling these rumblings via a number of provocative comments.

For those confounded by the headlines and statements “From the Desk of Donald J. Trump” — but also wondering if there’s any plausible basis for such scenarios — let’s review the options.

1. Reinstatement: According to the New York Times’ Maggie Haberman — and vouched for by National Review’s Charles C.W. Cooke, among others — Donald Trump has been musing aloud within his inner circle about the possibility of being reinstated as commander-in-chief by August — yes, that means by August, 2021.

On June 1, Haberman tweeted: “Trump has been telling a number of people he’s in contact with that he expects he will be reinstated by August (no that isn’t how it works but simply sharing the information).”

Cooke confirmed Haberman’s claims, adding that, according to his reporting, Trump expects that former Sens. David Perdue of Georgia, and Martha McSally of Arizona, will be marched back into the upper chamber.

It is unclear just how Trump plans to effectuate an August return, but he has been closely monitoring the audit efforts underway in Maricopa County, Ariz., and Windham, N.H., as well as the developing audit efforts in Pennsylvania and Georgia.

From a legal standpoint, however, even those with close personal and professional ties to Trump doubt the Constitution leaves room to reinstate a president following the certification of his defeat by the Electoral College.

Regardless of the findings of any audit, “it is highly unlikely that any court will reverse the Electoral College votes,” said Jenna Ellis, former Trump campaign senior legal adviser. “The constitutional and legally viable judicial options at this point, are to hold accountable the administrators, public officials, and secretaries of state who disregarded state law.”

“The states allowed those certifications for the Electoral College delegates to be given to Congress, and the Electoral College is how we select a president in the United States,” Ellis continued. “The Republican-led state legislatures who were too spineless to exercise their constitutional responsibility to ensure the correct slate of delegates were sent to Congress must now provide the American people with confidence that this lawlessness will never happen again and put reasonable election integrity safeguards in place, as President Trump outlined this weekend in his North Carolina speech.”

Of course, there are alternatives to the court-ordered reinstatement fantasy …

2. Rep. Donald J. Trump: Trump parachutes into the midterm campaign cycle, running to become a member of the House of Representatives. His official Florida residence would allow him to run in a Republican-friendly district. Republicans take back the House and Senate — by what would have to be significant margins. Trump is elected Speaker of the House. Congressional Republicans successfully impeach both President Joe Biden and Vice President Kamala Harris. Trump is once again the president of the United States.

Conservative radio host Wayne Allyn Root floated this idea last week during an interview with Trump, to which the former president responded, “That’s so — that’s so interesting.” He went on to call it a good idea.

3. The no-election speakership: For the Congressional rules buffs out there, Ari Fleischer has the early-return scenario for you.

“If you want to engage in conspiracy theories and wild dreams, here’s the ultimate scenario,” the former press secretary under President George W. Bush said on “Just the News AM” Monday. “You don’t need to be a member of the House of Representatives to be elected speaker. So, Republicans take back control of Congress in 2022, and when it comes time to vote for speaker, they can name [Trump] speaker. Then, if Republicans took two-thirds of the Senate, they can impeach Joe Biden, impeach Kamala Harris, and voila — Speaker Donald Trump becomes president.”

“Anything else and everything else is a fantasy,” said Fleischer. “There is no reinstatement clause, it’s not part of American government.”

4. The long game: And finally, the likeliest — and most conventional — of the Trump-return scenarios: The ex-president waits it out until 2024, when he will be afforded the legally uncontroversial option of again running for the highest office in the land and possibly winning — this time potentially with a mandate stemming from the results of the ongoing 2020 swing-state audits.

In the last month or so, speculation that the former president will run again in 2024 has jumped from being pure speculation to something Trump is remarking upon daily. Over the weekend, he answered questions on Fox News about his next potential running mate. Following Facebook’s decision last Friday to maintain the ban on Trump’s account until at least January 2023, those subscribed to the Save America PAC email list received a brief note from Trump: “Next time I’m in the White House there will be no more dinners, at his request, with Mark Zuckerberg and his wife. It will be all business!