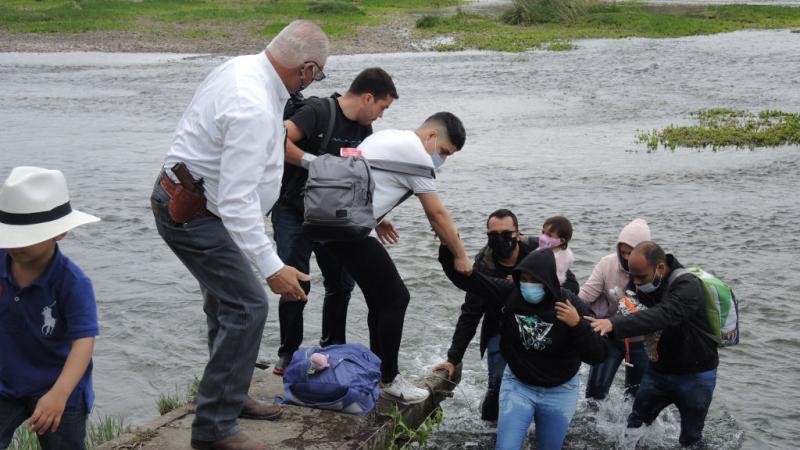 Ron DeSantis: Texas, Florida ‘will enforce the law’ at border amid Biden neglect of ‘duty’

DeSantis said Texas and Florida are “sending a clear message to Washington: Our states will enforce the law while the Biden Administration neglects its duty. Law enforcement from across the country are ready and willing to help secure our border.”

Florida law enforcement personnel who have been working with Texas DPS in the Del Rio sector in Val Verde County told DeSantis that the majority of people they have arrested, roughly 70%, said their destination was Florida.

So far, DeSantis said, Florida law enforcement “has assisted with the apprehension of more than 2,800 illegal aliens,” numbers he called “eye-popping.”

“What’s been the most eye-opening,” he added, “is the number of people who are coming across illegally who say their destination is Florida.”

“Numbers matter,” McCraw said. Florida law enforcement has been teaming up with DPS on patrols, he said, as well as game wardens and tactical marine units, targeting stash houses and human smuggling networks. “There is no single organized crime group that is more violent than the Mexican cartels,” he added, and “they’ve enlisted 16 gangs in Texas” to help them.

Additional manpower makes it safer for DPS personnel, McCraw says, so they can double up on patrol.

Since June 2011, through fingerprint checks DPS has apprehended 233,000 individuals who have been previously arrested by Border Patrol, a number he says is a “snapshot” of a larger problem because it excludes federal apprehensions and those who have gotten away.

DeSantis said the crime statistics were staggering and that Florida is not immune from crime at the border. Recently, a criminal illegal alien who had been deported multiple times killed a deputy sheriff in Nassau County, Fla., he said.

Of those coming into the U.S. illegally, 40% who are caught are being released, Judd said. The Biden administration is “rewarding criminal activity,” he added, forcing governors to step up and do what the federal government should be doing, securing the border.

“The federal government abdicated its responsibility, and members of Florida law enforcement volunteered,” DeSantis said. “They want to be here. When we’ve had issues in Florida [during multiple hurricanes] Texas came.” DeSantis said the biggest issue Florida law enforcement has seen in the past few months is an increase in meth in their communities coming directly from the southern border.

The record number of people entering the U.S. illegally, DeSantis said, will greatly impact communities in Florida and throughout the country, putting stress on public resources like schools, social services and health care.

The amount of fentanyl Texas DPS has confiscated “is enough to kill everyone living in Texas, Florida, Nebraska, Iowa, South Dakota, Arkansas and Ohio,” Abbott said. “The best place to interdict drug smuggling,” he added, “is not in Florida or Iowa but here on the border.”

Judd said the last month was a record in the history of border patrol in the number of apprehensions of illegal border crossings.

“The truth of the matter is that it is not humane to not enforce the law,” he said, responding to a Biden administration claim that their immigration policies are humane. “It is inhumane that liberal policies are allowing the smuggling, it is inhumane to have people cross the border illegally in these harsh conditions.”

17 Republican Anti-Trump Traitors Who MUST Go