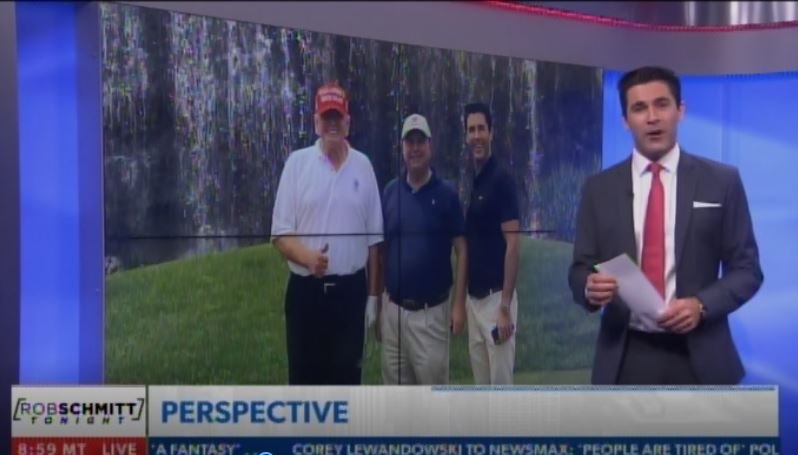 Schmitt did not play golf with Donald Trump but did spend time with him and have lunch with him after Trump played a round.

On Monday Rob Schmitt told his audience President Trump is going after McConnell in the midterms.

Rob Schmitt: He talks just like a regular guy. Loves to tell dirty jokes and cuss and do all the things guys do. He’s warm and personable, very engaging. Not a politician, that’s his best quality. And he says he’s going after Mitch McConnell. And anybody who supports him, he’s thinking about not supporting them!

“VINDICATED” TRUMP Responds To Winning FAKE Stormy Daniels Case…”I never had an affair with Stormy Daniels, nor would I ever have wanted to”

“You were here almost three weeks ago, and I asked if there was any evidence, documentary evidence, text messages, photo evidence that verified that Stormy Daniels had the affair that she claims she had. You said to me, ‘that’s a question Ms. Daniels will have to ultimately answer.’ Cut to last night, she’s asked directly about this on “60 Minutes,” and she says my attorney has instructed me not to answer. So does this, or doesn’t she have the evidence?”

As has been the case with every fake lawsuit brought against President Trump since he took office, it turns out the Stormy Daniels story was another fabrication.

CNBC – Daniels sued Trump when he was president in 2018, seeking to void the non-disclosure agreement with Cohen. While Trump later agreed not to enforce the agreement, a judge in 2020 ordered him to pay Daniels more than $44,000 for her legal fees in that case.

Later in 2018, Daniels sued Trump again, claiming he defamed her when, in a Twitter post, he scoffed at a police sketch artist drawing of a man who Daniels said had threatened her in 2011 over her allegation of having had sex with Trump.

Trump called the sketch a “con job” about a “nonexistent man.”

A federal judge dismissed that lawsuit later in 2018, saying Trump’s statements were protected by the First Amendment of the Constitution.

He also ordered Daniels to pay Trump’s attorneys’ fees in the case and sanctions.

The U.S. Supreme Court in February 2021 rejected Daniels’ effort to appeal the decision.

The appeals court also said that the same judge had properly included another $1,000 in sanctions against Daniels in the same judgment that awarded Trump attorneys fees.

The 9th Circuit just issued a final ruling in the Stephanie Clifford (aka Stormy Daniels) frivolous lawsuit case against me brought by her disgraced lawyer, Michael Avenatti, upholding the lower court ruling that she owes me nearly $300,000 in attorney fees, costs, and sanctions (not including appeal costs). As I have stated many times throughout the years, I never had an affair with Stormy Daniels, nor would I ever have wanted to. The ruling was a total and complete victory and vindication for and of me.

The lawsuit was a purely political stunt that never should have been started or allowed to happen, and I am pleased that my lawyers were able to bring it to a successful conclusion after the court fully rejected her appeal. Now all I have to do is wait for all of the money she owes me. 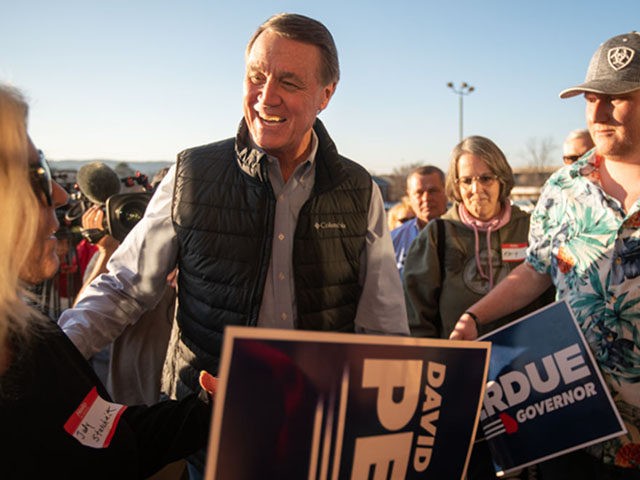 Former President Donald Trump held an expensive fundraiser at Mar-a-Lago in Palm Beach, Florida, on Wednesday night on behalf of former Sen. David Perdue (R-GA), who is challenging Georgia Gov. Brian Kemp (R) in the gubernatorial primary in May.

Trump, who has been a vocal critic of Kemp since the 2020 election, said in a statement after the fundraiser that he believes Perdue is the “only” candidate able to defeat Stacey Abrams, the Democrat voting rights activist who is also running for governor.

“David is a fearless and outstanding conservative leader, and he is the ONLY candidate who can beat Stacey ‘The Hoax’ Abrams this November,” Trump stated.

The Atlanta Journal-Constitution’s Greg Bluestein shared a copy of the event invitation, which showed attendance cost $3,000 per person and a photo with Trump and Perdue required raising or donating $24,200.

Perdue shared photos of the evening in a press release Thursday.

Trump also reiterated his disapproval of Kemp Wednesday night, calling the incumbent governor “a horrendous RINO who has betrayed the people of Georgia, and betrayed Republican voters. As governor, Brian Kemp has repeatedly surrendered to Stacey Abrams and the Radical Left.”

Trump then proceeded to bullet point reasons why Kemp was a “RINO,” all of which were related to the 2020 election, which Trump lost after two recounts in Georgia by a razor-thin margin of around 12,000 votes out of nearly five million cast:

Trump has repeatedly targeted Kemp over the consent decree, which was a legal settlement made between the Georgia Democrat Party and Secretary of State Brad Raffensperger in March 2020. The decree elaborated on the state’s process of signature verification on absentee ballots. The settlement was published on the website of Mark Elias’s then-law firm, Perkins Coie, a firm heavily involved nationally in fighting to loosen election laws in 2020. The settlement required a total of three election officials to sign off on absentee ballots that could not be signature verified. The settlement also specified the timeframe within which a voter must be notified of their rejected absentee ballot so that the voter had a reasonable opportunity to “cure” the signature issue.

Perdue acknowledged in an interview with Breitbart News in December that Kemp did not sign the settlement, but he argued the governor was complacent in the pre-election signature fight. “By the way, the governor actually didn’t sign the consent decree. My argument with the governor is he didn’t stop it. They didn’t. They didn’t bring it public. They didn’t make this open,” Perdue said.

Trump’s bullet points also referenced the election integrity group True the Vote’s investigation into alleged ballot harvesting, as well as the tens of millions of dollars that two Zuckerberg-funded nonprofits spent on an array of election administration activities in Georgia in 2020.

Kemp, for his part, sought to address election fraud concerns after 2020 by passing the sweeping Election Integrity Act of 2021, a high-profile bill that led the influential Heritage Foundation to dub Georgia’s elections the most secure in the country after the bill was signed into law.

The gubernatorial primary takes place on May 24, and so far Perdue has trailed Kemp in polls by ten points or more, meaning Perdue has about two months to turn the tide in his favor.

Trump’s high-dollar fundraising, public statements, and upcoming rally — which is slated for March 26 — indicate the former president is doubling down and investing heavily in unseating Kemp in the final two months of the race.

The former president concluded in his statement Wednesday night, “A vote for RINO Brian Kemp in this primary is a vote for Governor Stacey Abrams. A vote for David Perdue is a vote to save Georgia from the Radical Left!”