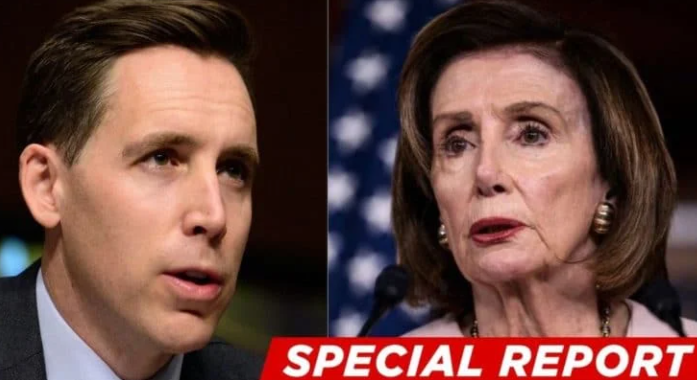 It’s one of the most important questions Washington faces today: should elected officials be allowed to participate in stock trading, particularly if they’re in a position of influence and power?

Recently, the debate concerning Congress members holding stock has exploded on Capitol Hill. And some leaders like House Speaker Nancy Pelosi see nothing wrong with the idea.

But one Republican leader sees a lot wrong with it — and he’s proposing a law to stop it.

According to a report published in DealBook (based on Capitol Trades research), members of Congress and their immediate families exchanged over $630 million in stocks in 2021.

“This is a free market and people — we are a free market economy,” Pelosi said at the time. And that’s why she believes that those elected to Congress should be able to be in the stock market.

However, Sen. Josh Hawley is one of many GOP leaders who think this amounts to “insider trading.”

Via The Daily Wire:

THE LEGISLATION — ENTITLED THE ‘BANNING INSIDER TRADING IN CONGRESS ACT’ — WOULD STOP LAWMAKERS AND THEIR SPOUSES FROM HOLDING, BUYING, OR SELLING INDIVIDUAL STOCKS.

HOWEVER, THE BILL WOULD NOT BAN INVESTMENTS IN MUTUAL FUNDS, EXCHANGE-TRADED FUNDS, OR TREASURY BONDS.

Despite Pelosi’s defense and citing of the free market economy, Hawley believes that Congress members are in unique positions of power.

He says proof of this can be found in the fact that politicians keep making tons of money on the stock market. In other words, it’s as if they know what those stocks are going to do ahead of time.

As Sen. Hawley said in a statement on Twitter:

YEAR AFTER YEAR, POLITICIANS SOMEHOW MANAGE TO OUTPERFORM THE MARKET, BUYING AND SELLING MILLIONS IN STOCKS OF COMPANIES THEY’RE SUPPOSED TO BE REGULATING.

WALL STREET AND BIG TECH WORK HAND-IN-HAND WITH ELECTED OFFICIALS TO ENRICH EACH OTHER AT THE EXPENSE OF THE COUNTRY.

This is another attempt at passing a law to stop Congress members from trading stock.

Initially, Sens. Jon Osoff (D-GA) and Mark Kelly (D-AZ) wrote up a similar proposal, but there’s one difference: their bill would ban dependent children from investing, while Hawley’s would not.

If either bill gets through, however, it will definitely put a crimp in the bank accounts of many officials in Congress.

It’s certainly a fact that many have made a lot of money on the market in recent years, and one wonders if they really do have too much influence. Passing laws that might help certain stocks is another possibility.

BECAUSE SHOULD YOU BE ALLOWED TO PARTICIPATE IN THE STOCK MARKET WHEN YOU’RE INFLUENCING THE DIRECTION OF THE STOCK OR WHEN YOU KNOW WHICH DIRECTION SOMETHING’S GOING TO GO IN?

OR WHEN YOU’RE GOING TO PASS A LAW THAT’S GOING TO BENEFIT THESE BUSINESSES, THAT’S GOING TO FORCE THE STOCK TO GO UP, AND YOU KNOW THAT, SO YOU INVEST A SH*T TON OF MONEY BEFORE IT HAPPENS?

On Wall Street, insider trading is of course illegal. In this case, Sen. Hawley believes this is exactly what some of our politicians are doing, even if they’re not technically a part of Wall Street.

And if they are benefiting from their positions, if they’re raking in personal fortunes because of their unique influence, then maybe we do need a law to stop it.