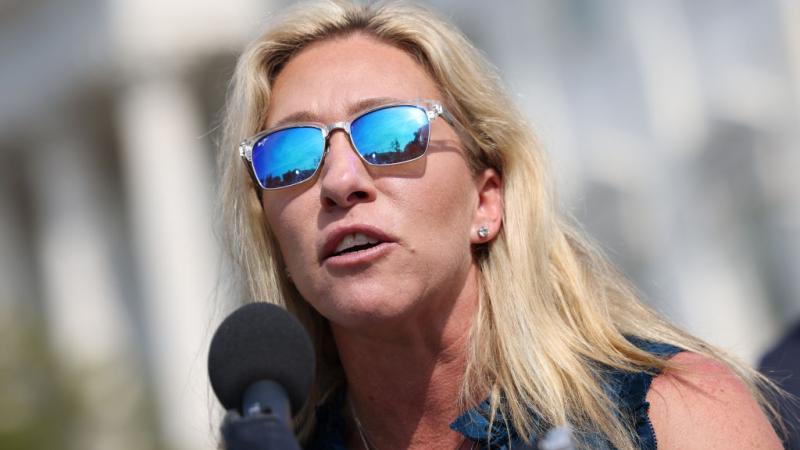 Rep. Marjorie Taylor Greene during a Monday interview on The Water Cooler on Real America’s Voice called Rep. Ilhan Omar an anti-Semite and said that House Speaker Nancy Pelosi “basically has no soul.”

The freshman Georgia Republican lawmaker’s comments came in response to host David Brody noting that Pelosi has not taken action against Rep. Omar: “Pelosi, there’s just been no action from her on Omar. She loves taking action against you and other Republicans, but on Omar, nothing. What’s your take on that?” Brody inquired.

Greene said that Pelosi needs to “keep all of her gang together” due to her party’s slim majority. “And so she’s, you know, she basically has no soul. She’s so busy selling out anything she possibly can to keep her group together so that they can win and defeat Republicans, all of us in Congress, that she’s willing to just bend over backwards to anti-Semites like Ilhan Omar who truly has offended everyone with her horrible comments comparing our great American military and Israel’s military to terrorist groups,” Greene said.

Some Democrats recently condemned some of Omar’s words and called for the Minnesota Democrat to issue a clarification.

“We have seen unthinkable atrocities committed by the U.S., Hamas, Israel, Afghanistan, and the Taliban,” Omar said in a tweet last week.

A dozen Democratic lawmakers issued a joint statement in which they said: “Equating the United States and Israel to Hamas and the Taliban is as offensive as it is misguided. Ignoring the differences between democracies governed by the rule of law and contemptible organizations that engage in terrorism at best discredits one’s intended argument and at worst reflects deep-seated prejudice,” the lawmakers said in their statement. “The United States and Israel are imperfect and, like all democracies, at times deserving of critique, but false equivalencies give cover to terrorist groups. We urge congresswoman Omar to clarify her words placing the US and Israel in the same category as Hamas and the Taliban.”

We must have the same level of accountability and justice for all victims of crimes against humanity. We have seen unthinkable atrocities committed by the U.S., Hamas, Israel, Afghanistan, and the Taliban. I asked @SecBlinken where people are supposed to go for justice. pic.twitter.com/tUtxW5cIow— Rep. Ilhan Omar (@Ilhan) June 7, 2021

“To be clear: the conversation was about accountability for specific incidents regarding those ICC cases, not a moral comparison between Hamas and the Taliban and the U.S. and Israel,” Omar said. “I was in no way equating terrorist organizations with democratic countries with well-established judicial systems.”