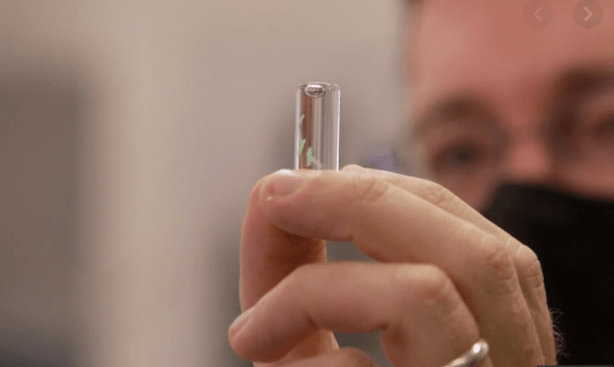 The chip developers described it as a check-engine light capable of emitting a light glow.

ARLINGTON, Virginia, April 14, 2020, was the place and time where Pentagon created a gel-style, tissue-like microchip. The chip is implanted under the skin to detect the presence of the COVID-19 virus before the person feels the symptoms.

The authorities’ plan to use the chip concerned the citizens about their liberties and usher in a bio-security state.
CBS 60 Minutes report revealed this on April 11. The report’s name is “military programs aiming to end pandemic forever.”

Dr. Matt Hepburn from DARPA shared how he had an assignment to develop a technology that will eliminate the pandemic.

While he described the mission DARPA assigned to him, Hepburn said they “challenge the research community to develop solutions that may sound like science fiction. And we’re very willing to take chances with high-risk investments that may not work.”

“But if they do, we can completely transform the landscape.”

He introduced the device, “subdermal implant … a tissue-like gel engineered to continuously test your blood,” and it will track human health.

According to Hepburn, it was a sensor that has to be under the skin and will provide a warning onset of the coronavirus symptoms. “It’s like a ‘check engine light,”

Those persons whose chip will signal some symptoms have to take a blood test, which will be done in three minutes.

The CBS interviewer said that the device was a “dreaded government microchip to track your every move,” We don’t have any other information about the chip’s working process.

Hepburn stated that the constant tracking of the virus is essential.

However, Hepburn introduced a dialysis-style blood filter that would clean the blood, and all the tracks of the virus will be filtered and returned to the body.

It is a treatment that requires four days and is used on a patient with organ failure and septic shock. It was effective. The doctors used this treatment to save 300 critical patients.

Dr. Kayvon Modjarrad is another military researcher in Pentagon. He is working on a “vaccine for the whole family of coronaviruses.”

That injection will serve to achieve Hepburn’s mission of preventing any pandemic.

Besides. the injection should be used in real-life situations five years from now because it is in clinical trials.

“This is not science fiction, this is science fact. We have the tools, we have the technology, to do this all right now.”

According to Dr. Modjarrad, technology could “inoculate the world against killer viruses,” which were not even “seen or imagined” today.

Once the original report of 60 Minutes appeared, the mainstream media attacked with the headline “Pentagon unveils microchip that senses COVID in the body.”

Dr. Hepburn denied the insert was a microchip. “No microchip, no electronics, none of that stuff. It wouldn’t tell you if you had influenza or if you had COVID.”

Also, Hepburn explained that the device represented a gel-like tissue, and it responds to body substances and emits a glow. That is how the person would know “there might be something wrong, and you would complement that with a specific COVID test, or test for other pathogens.”

The news about the chipping of the population raised concerns on social media. Many people say that the authorities want to control the population.

One year ago, Life Site shared all the uses that this kind of device could have. Dr. Carrie Madej is an internist trained in osteopathic medicine. He suggested that the coronavirus injections are connected to the insertion of a barcode under the skin.

“Madej called it “Luciferase,” supposedly because this enzyme “gives a bioluminescence, a light” when activated. It would not be seen or felt by the host, but with a device “like a smartphone with a special app” one can scan over that section of the skin and it will light up, passing to the device a digital code, pattern, barcode and thus an ID of some kind.

Madej also pointed to another form of sub-surface technology, called “Hydrogel,” nanotechnology that she described as “microscopic robotic organisms,” developed by DARPA, and a private corporation called Profusa.

One primary function of this technology is to gather information from the host’s body, including blood pressure, blood sugar, heart rate, medications, and nutrients. However, Madej says. “It has the potential to be used for other things” as well, such as documenting how many steps one takes if a person is swimming, running, sleeping, menstruating, and potentially, even one’s emotions.

This data is constantly measured by the individual’s smart device, sent to the cloud, and to some other database. Or as she describes it, an “artificial intelligence” (AI).”

Moreover, the development of implanting this technology into humans conforms to Klaus Schwab’s goals, a globalist and WEF founder.

Schwab described the Fourth Industrial Revolution as being “characterized by a fusion of technologies that blur the lines between the physical, digital, and biological spheres.”

“The possibilities of billions of people connected by mobile devices, with unprecedented processing power, storage capacity, and access to knowledge, are unlimited. And these possibilities will be multiplied by emerging technology breakthroughs in fields such as artificial intelligence, robotics, the Internet of Things, autonomous vehicles, 3-D printing, nanotechnology, biotechnology, materials science, energy storage, and quantum computing.”

“The Fourth Industrial Revolution, finally, will change not only what we do but also who we are. It will affect our identity. And all the issues associated with it: our sense of privacy, our notions of ownership, our consumption patterns, the time we devote to work and leisure, and how we develop our careers, cultivate our skills, meet people, and nurture relationships. It is already changing our health and leading to a ‘quantified’ self. And sooner than we think, it may lead to human augmentation. The list is endless because it is bound only by our imagination.”