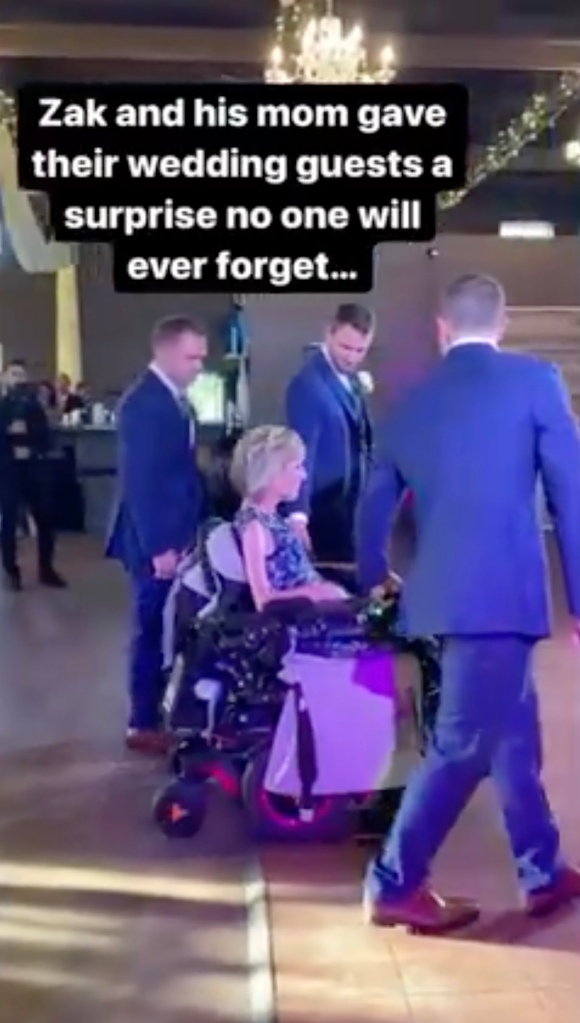 
In an emotional moment captured on video, a groom shared a dance with his mother who is unable to walk.

Zak Poirier and his mom, Kathy Poirier, went viral after the son — along with his wedding planner — each shared footage of the heartwarming moment on social media.

Kathy Poirier, 55, was diagnosed with amyotrophic lateral sclerosis (ALS) — often called Lou Gehrig’s disease — more than three years ago. ALS is a nervous system disease that weakens muscles and affects as many as 30,000 in the US, with 5,000 new cases diagnosed each year, according to Johns Hopkins Medicine.

On the big day, April 9, 2022, Zak’s younger brothers Nick and Jake helped their mom get to feet and offered her support so that she could dance with her eldest at his wedding to his longtime love, Anja D’adesky.

The new husband told Fox News Digital that he and his mom danced to the song “Humble and Kind” by Tim McGraw in front of a crowd of about 130 guests at Ever After Farms Blueberry Wedding Barn in Mims, Florida.

“We had planned it. The actual dance itself was spontaneous,” Zak Poirier, 28, said during a phone interview. “We were both pretty adamant that we wanted to share a dance regardless of how long it was. By the time we got up there, we weren’t really sure how it would work — but it went perfectly, and it was great.”

Mom Kathy, for her part, she felt honored that her son wanted to dance with her at his wedding, but she was still anxious ahead of that moment.

“It’s that this was such a milestone in one of my kids’ lives, and it wasn’t what I had envisioned,” she continued. “It was really emotional to have to accept the fact that I can’t stand or use my hands. And that people would be watching me. And I felt like I was going to be judged. But I knew I wanted to do it, and I wasn’t going to let anybody tell me I couldn’t.”

All of her nervousness went away, she said, when she began dancing with her son.

Zak Poirier, on the other hand, said he felt at ease and everything became a blur because he was so focused on the moment with his mom.

“It was definitely a different feeling,” he said.

“With a diagnosis of ALS, it’s got nothing but grave news attached to it,” Kathy Poirier added. “But to be in the arms of all three of my sons was just beautiful. It just made me feel strong.”

When mother and son completed their dance, they received a standing ovation from their guests, according to the viral video shared by wedding planner Roots to Stems.

Guests made sure to share kind words with the mother-and-son duo throughout the night.

“I thought everybody was just so beautiful, inspired and supportive,” said the proud mom. “All that fear that I talked about — you know, being worried standing up there — just melted away because I just realized how everybody was just so just downright pleased with my spirit and Zak’s love. It was just wonderful.”

Mother and son said they’re happy they went through with their dance plan instead of opting for a slideshow or other alternative to replace the beloved wedding tradition.

When asked what it feels like to go viral, Zak Poirier said he appreciates all the supportive comments and messages he’s received from social media users.

“I’m really glad that my mom is getting the attention and recognition she deserves because, you know, she goes through this every day … People are resonating with that moment and appreciating that moment,” he added. “It really speaks volumes about my mom in general.”

Kathy Poirier is happy that their viral videos have helped raise awareness for ALS.

“This disease — it’s been over 80 years since Lou Gehrig was diagnosed and there’s still no cure,” she said. “And doctors will tell you that you have three to five years to live. Don’t ever believe that. Because you can fight it.”

She continued, “I think when you put your mind to it, you can overcome any obstacle in your way.”

Aside from their shared dance, a favorite moment together was the mother and son trip they took to Portugal when Zak was a high school soccer player.

“I was able to bring someone with me and I brought my mom,” he recalled. “For a whole week, it was really awesome to get to experience that with my mom and my mom alone.”

“Zak was our first. He taught me how to be a mother,” she added.

“He was a very smart, smart, little boy. Inquisitive and cockeyed and loving. And he always acted like a leader. I just knew that he was destined for great things.”

Newly married couple Zak and Anja have been together for eight years and have a shared passion for pierogies — Polish dumplings.

This controversial book talks about AOC instead of ABCs