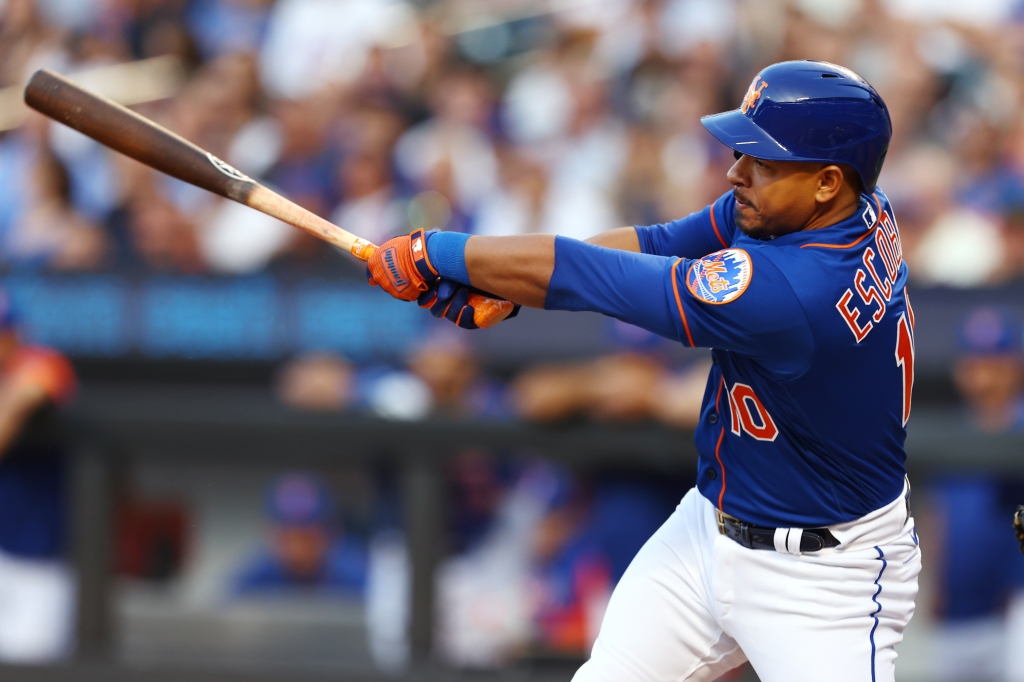 
The Mets, already playing shorthanded, played without Eduardo Escobar on Thursday because of what manager Buck Showalter called a “non-workplace event.”

Escobar was around the clubhouse earlier in the day, but was not in the lineup for the Mets’ 5-4 win over the Brewers or seen in the dugout at Citi Field.

Showalter said he could not divulge more, cited HIPAA and added, “That’s all I can say legally.”

The manager was not sure if Escobar would be available for the Mets on Friday.

“I don’t know yet,” Showalter said. “Let the people in the medical profession do their job.”

Escobar, a key free-agent signing this offseason, has a slash line of .236/.301/.397 in 60 games this season. The switch hitter has done more damage against lefties, so he normally would have been expected to be in the lineup against Milwaukee lefty Aaron Ashby.

Lefty-hitting Luis Guillorme started at third base and went 2-for-4.

Francisco Lindor has had a hot-and-cold season, but the latest cold spell has come after he caught his right middle finger in double doors in his Los Angeles hotel suite.

Lindor returned to the lineup early this month after missing one game against the Dodgers. In the 11 games since, he has gone 8-for-49 (.163) after he went 1-for-4 Thursday night.

Asked if the finger was still bothering Lindor, Showalter said, “I’m sure it is. He hasn’t used that as an excuse.”

Lindor’s strange season began with a sizzling April, in which he posted an .850 OPS that hinted last year’s struggles were behind him, before a 9-for-60 skid dropped his average all the way to .228 in mid-May.

He rebounded in the second half of May and finished the month with a respectable .260 average and .790 OPS. The latest downturn has sent his numbers tumbling again.

A perhaps overlooked number Showalter is pleased with: Lindor has played in 64 of the Mets’ 65 games this season, despite the fractured finger and getting beaned in April.

“I think it’s good to make note of the fact that he’s still playing,” Showalter said.

Starling Marte didn’t start after he was hit in the right forearm with a 97 mph sinker Wednesday, but he pinch ran for J.D. Davis in the eighth inning Thursday and scored the winning run.

The right fielder said he felt “a little bit limited” while trying to take swings, but felt confident he would not miss more time.

“Maybe give it another day and I’ll be ready to go,” Marte, whose X-rays were negative, said through interpreter Alan Suriel.

The Mets are carrying the maximum 14 pitchers, and Showalter is not looking forward to Monday, when the roster must be adjusted, with a 13-pitcher limit taking effect.

“It’s going to be a challenge,” said Showalter, who hoped the eventual returns of Max Scherzer and Jacob deGrom will help a bullpen that will be down one arm.

Several Mets showed support for the sixth Pride Night at Citi Field on Friday, when the game against the Marlins will celebrate “fans from around the world who are part of the LGBTQ+ community.”

“How many of my beautiful LGBTQ+ people coming to @Mets pride night tomorrow?!” Mark Canha tweeted with a string of different colored hearts.