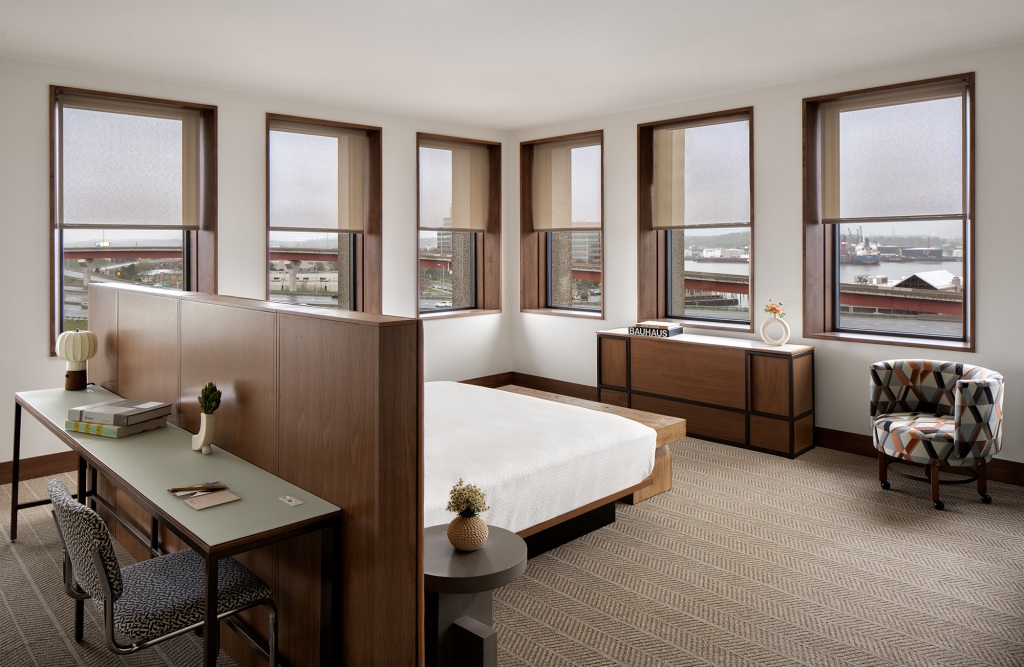 
How ironic: The building hovering in sight of busy traffic choked I-95 in New Haven, Conn., claims to be the first net-zero hotel in the nation.

Opened this month, Hotel Marcel is big news in the energy-sucking hotel world, but there’s lots more to this building than a big hug to our planet: It is an architectural marvel, too.

Hotel Marcel, a Tapestry Hotel by Hilton (room rates start at $229), to give this Brutalist icon its full new name, was originally designed as the Armstrong Rubber Company HQ by Bauhaus alum Marcel Breuer — a Hungarian architect and designer famed for his much-reproduced (hello, IKEA!) form-fitting minimalist chairs, and who eventually lived on East 63rd Street after fleeing Nazi Germany.

Listed on the State and National Register of Historic Places, the Pirelli Building, as it became known, is a futuristic two-tiered block — which appears spookily suspended in the air from the highway — completed in 1970. Abandoned for decades, architect and developer Bruce Redman Becker of Connecticut-based architects Becker + Becker, bought the neglected building in 2020.

“I have a passion for historic buildings. I love this building and have done for years, and my appreciation just gets greater working on it. There is a great poetry to it; but nothing is accidental,” he told The Post while grabbing a coffee at the IKEA megastore next door. (Another irony!)

Using less will help that: a Power over Ethernet lighting system nixes the usual hotel model of lights left on in empty rooms and spaces. Then there are simple things like a water-filling station, giving guests the comfort of plastic bottle-free drinking water.

More likely, guests will notice the cool design, though.

An original Breuer-designed desk is incorporated into the lobby’s hospitality desk and the sunken lounge — a feature Breuer often favored — is refurbished.

“Level one was a huge space without columns. We had to create a dynamic area from this blank industrial space — it was intimidating,” said interior designer Larah Moravek, a founding partner of Brooklyn-based Dutch East Design, who added Cradle to Cradle certified upholstery in Bauhaus inspired graphic prints, and low emissions, low-VOC furnishings.

“It was a real eye-opener. Once you know what you know, you can’t turn away,” she added of toxic furnishings.

If level one was a blank space, level nine, which housed mechanical elements, was a hidden one.

“The ninth floor saw the most dramatic change. This was the level no one other than a mechanic went to before,” said Becker. “Once we began to peel back the layers and saw the trusses, it took shape,” he said of Breuer’s original 16-foot-high trusses suspending the building’s upper block from the lower.

“We removed concrete walls and replaced with glass to create a glass courtyard and an interior courtyard with light wells,” Becker added of what is now 7,000 square feet of meeting and event space.

In the breakfast-through-dinner restaurant, BLDG, biodynamic and organic wines are poured from a back-lit perforated metal horseshoe bar, and locally sourced food ingredients are served up in a dramatic room with a floating island centerpiece.

All this had to be done with historic preservation orders in place. The eighth floor’s nine historic rooms and suites, some with kitchenettes, were once executive offices. “We could not touch the wood veneers or acoustic tile ceiling,” said Moravek.

“They have a feeling like in Mad Men,” said Becker of the historic rooms. “They have amazing views of Long Island Sound.”

Becker feels guests will not only have a blast in the space, but feel better doing it.

“A bonus of being all-electric is better air quality,” he said. “Guests will get a healthier night’s sleep. The building is also super quiet. You can’t hear the highway.” 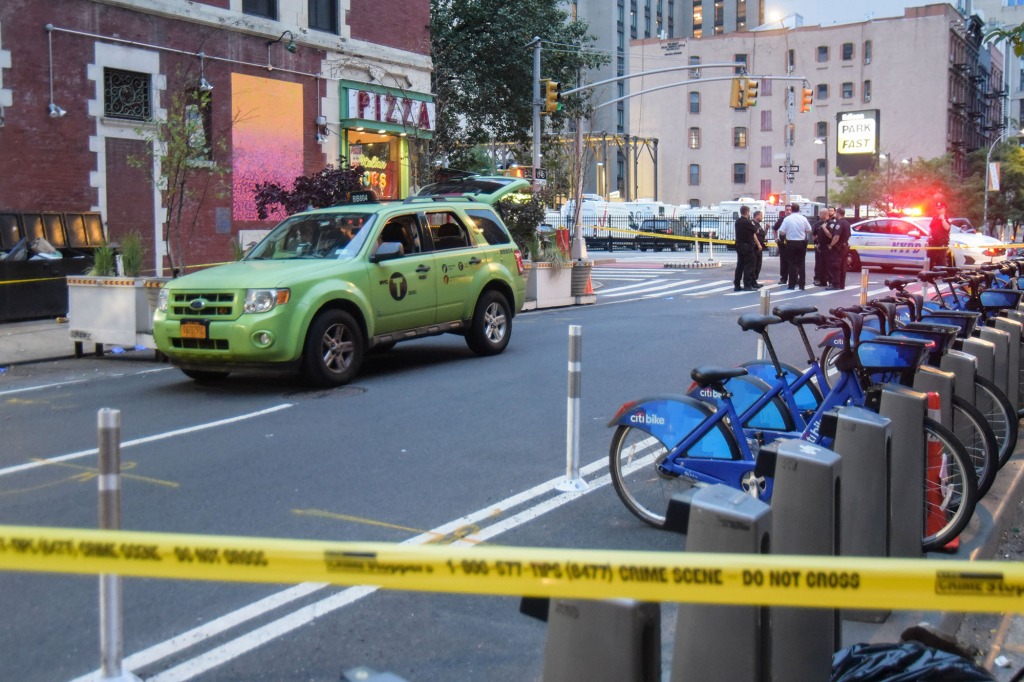 Now taking a cab doesn’t even keep you safe from gunfire!

Two young men enjoying an evening out in the Big Apple became the latest unintended victims of gunfire, when they were hit by bullets while sitting in a taxi early Saturday.

The pair were with a group of friends at about 3:50 a.m., in the cab heading from Brooklyn to Manhattan, when shots that were intended for others hit them, sources said.

The bullets flew as the cab drove down West 36th Street between Eighth and Ninth Avenues, near Vito’s Slices and Ices pizza shop, which was closed at the time.

Investigators believe three shooters were aiming at a couple wearing a lot of jewelry outside the shop, sources said.

“It’s getting out of hand,” said Alexander Franklyn of Staten Island, whose 24-year-old son, Nicalus, was hit in the arm. “You don’t seem to be safe anywhere.”

Franklyn said his son was in the back seat of the cab and the bullet shattered a bone in his arm. He was heading into surgery at Bellevue Hospital on Saturday afternoon.

Nicalus, a case worker for a social services agency, and had been with three other friends, all pals from playing rugby, and was going to the Manhattan apartment of one of them when he was shot, his dad said.

“I’m not sure what the future’s going to hold,” Franklyn said of his son’s ability to continue playing.

The other victim, 22-year-old Samy Shelbaya, was grazed in the arm by a bullet, Franklyn said.

The Taxi and Limousine Commission said it was investigating the shooting but would not release information on who owned the cab.

A neighborhood resident who gave her name as Jazzy said she was out with friends and came across the crime scene Saturday.

20-year NYPD veteran retires by giving the department the finger 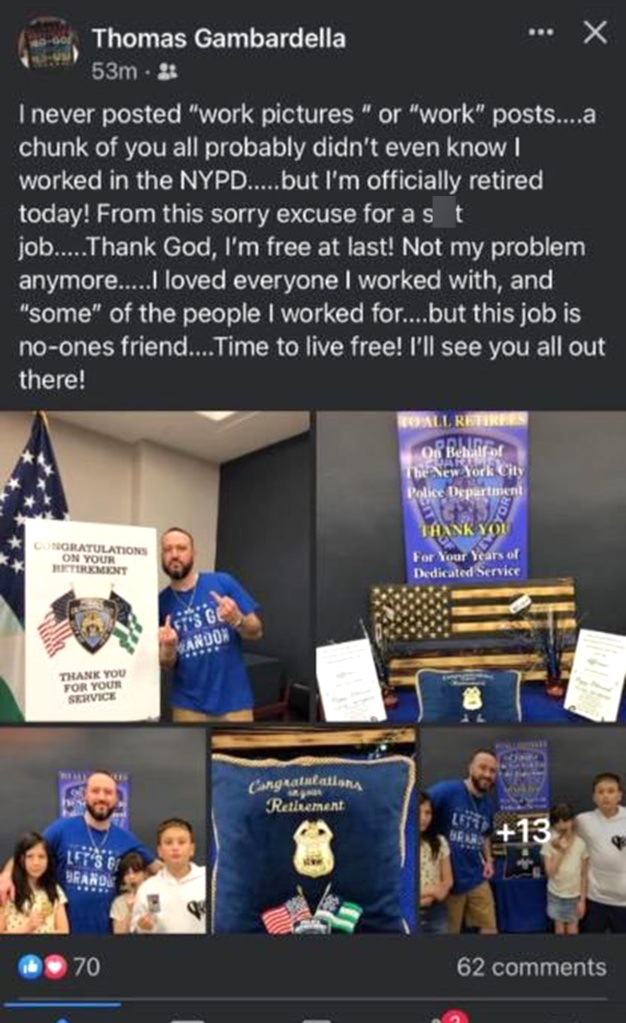 A 20-year decorated veteran of the NYPD celebrated Independence Day a little early by retiring and giving the department the finger — literally.

Thomas J. Gambardella, 41, of Staten Island, posted a photo on Facebook of himself flipping the bird at a memorial inside NYPD headquarters, while wearing a T-shirt reading “Let’s Go Brandon,” following his official retirement from the force two weeks ago.

The statue Gambardella took aim at depicts a police officer watching over the child of a slain cop.

“I’m officially retired today!” he wrote in a post at the time. “From this sorry excuse of a s–t job. Thank God, I’m free at last!… I loved everyone I worked with and ‘some’ of the people I’ve worked for. But this job is no one’s friend. Time to live free. I’ll see you all out there!”

Gambardella, who was most recently a detective sergeant, told The Post on Saturday that he loved his job when he started out — but the gig turned “s–t” due to the city’s increasingly soft-on-crime policies.

“I was a true believer,” Gambardella, who comes from a police family, said of his early years on the beat. “I wasn’t a bag of s–t. I worked some intricate details. I gave a lot of my blood, sweat and tears. But no more.”

A combination of increasingly liberal policies and what he said was the NYPD’s stranglehold over every aspect of his life led him to sour on the gig.

“It’s the worst f–king job in the world,” Gambardella said. “They own you. They’re not your friends. All that talk about the ‘big blue family.’ They don’t care. If I die tomorrow they wouldn’t give a sh-t. If I needed something it ain’t gonna happen. I’m better off just saying a prayer.”

The potty-mouthed former officer said he was disgusted by the increased hostility toward police, calls to defund the NYPD and crackdowns on what cops could or could not do.

“Crime is soaring and cops are leaving in droves,” Gambardella said. “Anybody can see that. All this liberalism is obviously a failure. But this is what they wanted. It’s a stupid experiment and it’s the people who will pay in the end.”

Gambardella said he has gotten some backlash to his posts and photos, though not much.

“I have a disease,” he said. “It’s called diarrhea of the mouth. People who know me know I’m like this. I don’t cower down.”

Gambardella, who is divorced with three kids, said cops were treated well under Mayor Michael Bloomberg and former police commissioner Ray Kelly, and that the public was better off with them, too.

“The minute they stopped the quality of life enforcement that was the beginning of the end,” he said. “Just having people know they could get a response from a noise complaint was a big deal. But that’s all long gone.”

Gambardella, who said he was named Officer of the Year in 2006 when he worked in the 68th precinct in Bay Ridge, Brooklyn, joined the force in July 2002. He was most recently in the detective squad at the 70th precinct in Kensington.

More than 2,119 NYPD officers have either resigned or retired so far this year – on pace to be the biggest exodus of officers since the statistics have been available.

Some 524 cops have resigned and 1,072 have retired as of May 31, NYPD pension stats obtained by The Post last month showed. In June alone, 523 officers left, with 400 retiring and 123 resigning, the most resignations in a single month in at least a decade.

“The majority of officers who are retire are proud of their careers and their service with the NYPD,” a high-ranking police source told The Post when asked about Gambardella.

Several current and retired NYPD detectives said they were stung and angered by seeing the photo of Gambardella giving the finger to the memorial statue at One Police Plaza.

One retired NYPD detective said that officers will often buy miniature versions of the statue for families of slain police officers with the officer’s shield number on it. 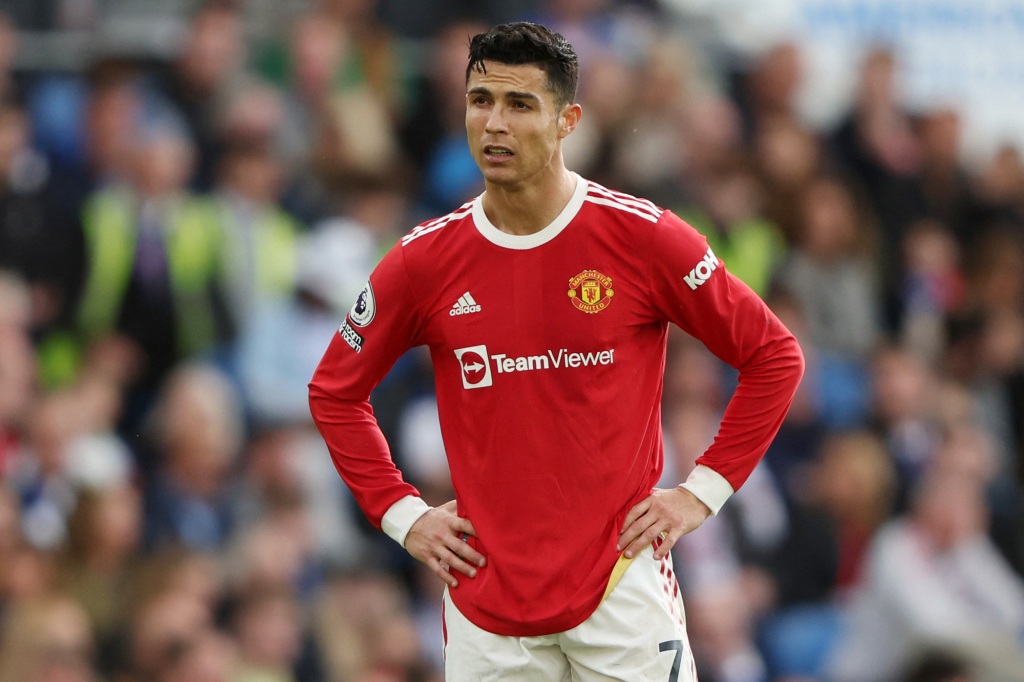 Cristiano Ronaldo’s Manchester United return could prove to be short-lived.

Just 11 months after Ronaldo was triumphantly announced at Old Trafford, the Portuguese superstar has told the club he would like to leave if they receive a strong enough offer, per multiple reports, after United failed to qualify for the Champions League last season.

Ronaldo scored 24 goals in all competitions to lead United, but the campaign was largely a disaster, as the club was sixth in the Premier League — tied for its second-worst finish of the Premier League Era — and lost in the Champions League Round of 16, failing to secure any trophies. Ronaldo, who came to United at the last minute after being linked to Manchester City, struggled to fit within Ole Gunnar Solskjaer’s system before Solsjkaer was replaced by the polarizing Ralf Ragnick.

According to The Athletic, newly minted Chelsea owner Todd Boehly met with Ronaldo’s agent, Jorge Mendes, last week to discuss the idea of him playing in London. The website also named Bayern Munich and Napoli as potential suitors, while Paris Saint-Germain is not considered interested.

Ronaldo reportedly has a year left on his deal with United, which does not view him as being for sale, according to The Athletic.

A five-time Ballon D’Or winner, Ronaldo’s 141 Champions League goals are the most of any player. If he is with United next season, it will be the first year in which he won’t take part in the top European competition since 2002-03, when he was 17 years old and playing for Portugal’s Sporting Lisbon.