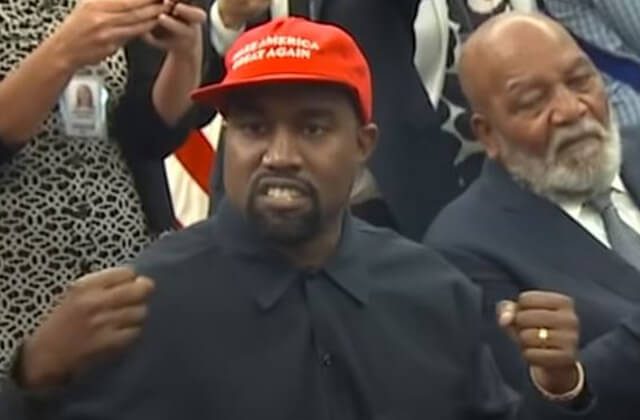 Kanye West Enrages the Left, Says America Should ‘Cancel Black History Month’ Because It Feeds the Lie of Black Victimhood

Kanye West may not still be rocking the MAGA hat as often, but don’t think he doesn’t still have leftists clutching at their pearls.

During an appearance on the podcast “Drink Champs” on Thursday — hosted by hip-hop icons N.O.R.E. and DJ EFN — West, now known legally as “Ye,” said Black History Month should be canceled and called out Vice President Kamala Harris for her disappearance since the taking office.

According to Variety, the two-hour-plus interview — which the publication called “wildly unfiltered,” as if the publication is unfamiliar with the man — garnered 3 million views in the first 12 hours after it was posted on Thursday and was the top trending topic on Twitter.

It was also the most viewed single episode to date for Revolt TV, the multimedia platform founded by rapper and entertainment executive Sean “Diddy” Combs that produces “Drink Champs” and other shows.

And it was a direct challenge to today’s liberal political orthodoxy.

“CANCEL BLACK HISTORY MONTH. WHY? I NEED BLACK FUTURE MONTH. I NEED BLACK POSSIBILITY MONTH. I’M TIRED OF SEEING US GET HOSED DOWN. I’M TIRED OF TALKING ABOUT SLAVERY & HOW WE SHOULD ONLY BE SO LUCKY TO VOTE FOR A WOMAN WE AIN’T SEEN SINCE THE ELECTION.”

“Why? I need Black Future Month. I need Black Possibility Month. I’m tired of seeing us get hosed down,” West continued.

“I’m tired of talking about slavery and how we should only be so lucky to vote for a woman we ain’t seen since the election.”

That isn’t the kind of talk Democrats want to hear from major black figures in American culture, of course. The progressive movement is too firmly tied to the narrative of black victimization, as a matter of both history and contemporary life.

When black celebrities like West embrace the idea of the opportunities the country offers, the idea of a black future, the left goes into melt-down mode.

But West has long made it clear he isn’t going to be intimidated.

Earlier in the episode, West had similar remarks about Harris, going after the vice president’s low profile in the wake of the 2020 election.

“You know [rapper] Pusha [T] voted Democrat — voted for Kamala — we ain’t seen her since the election either,” West said.

He also went on to criticize black voters’ affinity for the Biden-Harris ticket.

“They got 94 percent of the black female vote,” West said, before quipping: “You would have thought Drake was running.”

KANYE TAKES SHOT AT KAMALA HARRIS SAYING SHE GOT 94% OF BLACK WOMEN’S VOTE YOU WOULD HAVE THOUGHT DRAKE WAS RUNNING! PIC.TWITTER.COM/DPQW34JE1Y

Drake, for those of you who don’t know, is another hip-hop artist Kanye has a beef with. While the circumstances are complex, let’s just say Drake’s music is perceived to be of a more sensitive nature (particularly in a song apparently referencing West’s now-estranged wife Kim Kardashian).

Kanye went on to criticize musicians John Legend and Big Sean, who didn’t support West’s short-lived bid for the presidency in 2020 and are noted Democrats.

“And both John Legend and Big Sean, when I ran for office, got used quick by the Democrats to come at they boy that actually changed they life,” West said, according to Newsweek, referring to himself.

“And that’s some sellout s***. And I don’t rock with neither of them and I need my apology.”

He shouldn’t expect to get it, given that Legend said Kanye “saw in Trump the kind of underdog narcissist that he sees in himself,” according to People. Legend and West had it out on Twitter when West first came out for Trump.

Legend is an interesting name to bring up in this context, however, because he’s half of a Democrat power couple with model Chrissy Teigen. In 2019, as Politico reported, Teigen said Democratic women needed to say “f*** you” more. It turns out Teigen should have been saying bad things less; earlier this year, she was at the center of a massive cyberbullying scandal, which included telling a 16-year-old to kill herself.

That seems to have disappeared relatively quickly — and, indeed, if Teigen wanted to opine on politics, people would likely be too polite to even bring the matter up.

West talks about canceling Black History Month — an annual event which the left has turned into a celebration of perpetual black victimhood — and replacing it with something like Black Future Month. He mentions that Kamala Harris has largely disappeared from the spotlight. He’s described as “wildly unfiltered” by Variety.

No doubt we’ll see someone bring up his previous mental health episodes, as if that stops you from having a political opinion.

And just so you know, he may not bring the accessory out as often now, but Kanye’s still got the MAGA cap.

And nobody can ignore him, no matter how much the left just seems to wish he’d just go away.

In The Netherlands, 20,000 people protest return of masking, widespread use of vaccine passports