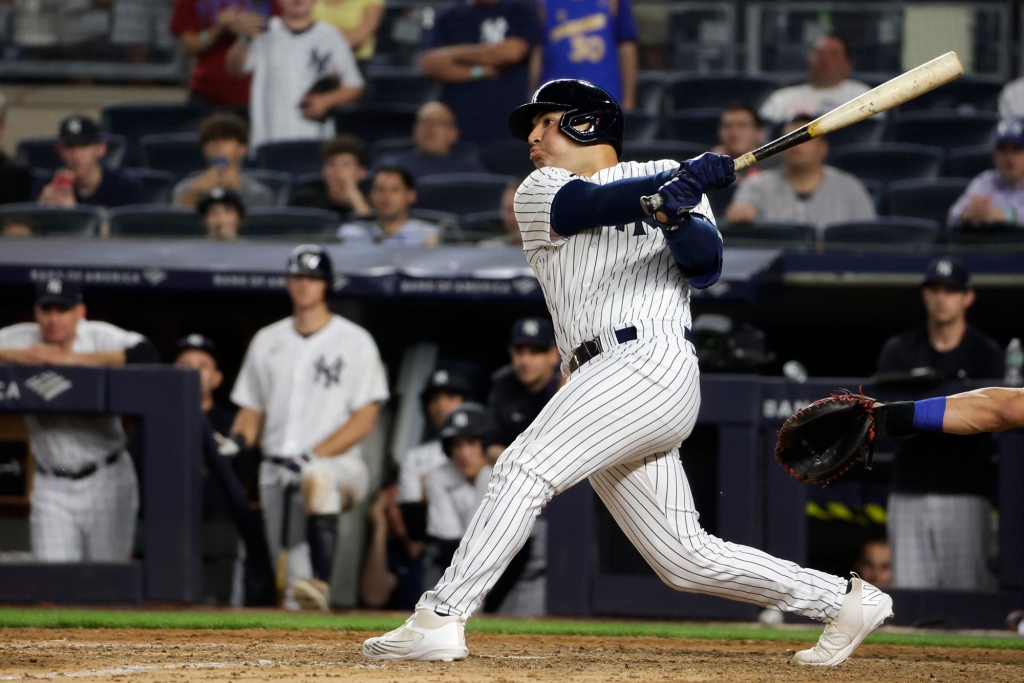 
A night after the Yankees’ offense bailed out an ineffective Gerrit Cole, they had to work overtime Friday night to make sure Luis Severino’s latest gem didn’t go to waste.

Jose Trevino, the last man left on the bench, finally delivered the big hit that was missing all night, coming through with an RBI single in the 13th inning to give the Yankees a 2-1 win over the Cubs in The Bronx.

Pinch-hitting for Kyle Higashioka, Trevino roped a line drive over the head of shortstop Nico Hoerner, driving home Joey Gallo from third base and setting off a celebration.

In the 11th, Schmidt induced a pop up and then helped himself out, snagging a line drive off the bat of Rafael Ortega and firing to second base for the double play.

Schmidt had gotten a more conventional double play to end the 10th. After intentionally walking Ian Happ with one out, the Yankees reliever got Frank Schwindel to ground into a 5-4-3 twin killing to end the inning.

The Cubs, meanwhile, intentionally walked Aaron Judge to lead off the 10th inning, Gleyber Torres to lead off the 11th and Judge again with one out in the 12th, but the Yankees couldn’t muster a rally in any of those situation.

The Yankees were coming off a 10-7 win at Minnesota on Thursday, in which Cole dug them a 7-3 deficit by the time he exited the game in the third inning.

But the bats were quieter on Friday night. After Torres put the Yankees up 1-0 with a solo homer in the fourth inning, they did not record another hit until Josh Donaldson’s infield single in the eighth inning.

Severino delivered another strong start, giving up just one run over six innings. He struck out 10 for a second straight outing, lowering his ERA to 2.80 and getting the Yankees’ rotation back on track after a rough series against the Twins.

Severino was sharp early, striking out five of the first six batters he faced before he got some help from his defense in the third inning.

With a runner on third, one out and the Yankees’ infield playing in, Christopher Morel hit a chopper to the left side. Torres fielded it and fired home to throw Jason Heyward out at the plate.

Then, with runners on first and second, Judge — starting his sixth straight game in center field — made a diving grab in the left-center field gap to rob Happ and keep the Cubs off the scoreboard.

Wade Miley shut the Yankees out for three innings, leaving the bases loaded in the third, before exiting the game with left-shoulder soreness.

Daniel Norris entered in the fourth and, on the first pitch he threw, Torres greeted him with a home run, giving the Yankees a 1-0 lead.

Heyward tied the score in the fifth inning when he cracked his first home run of the year, a solo shot off Severino.

Nick Madrigal and Morel followed by pouncing on first pitches for back-to-back singles with no outs. But Severino buckled down, striking out Willson Contreras (swinging) and Happ (looking) before getting Schwindel to ground out to end the threat.

Severino walked Patrick Wisdom to lead off the sixth, but then got a strike-him-out, throw-him-out double play to help expedite his final inning of work.

The Yankees had the makings of a rally in the eighth inning when Giancarlo Stanton walked and Donaldson singled with one out. But former Yankees reliever David Robertson escaped the jam by striking out Torres and Aaron Hicks.

Teacher arrested after sexting student, inviting him to her home