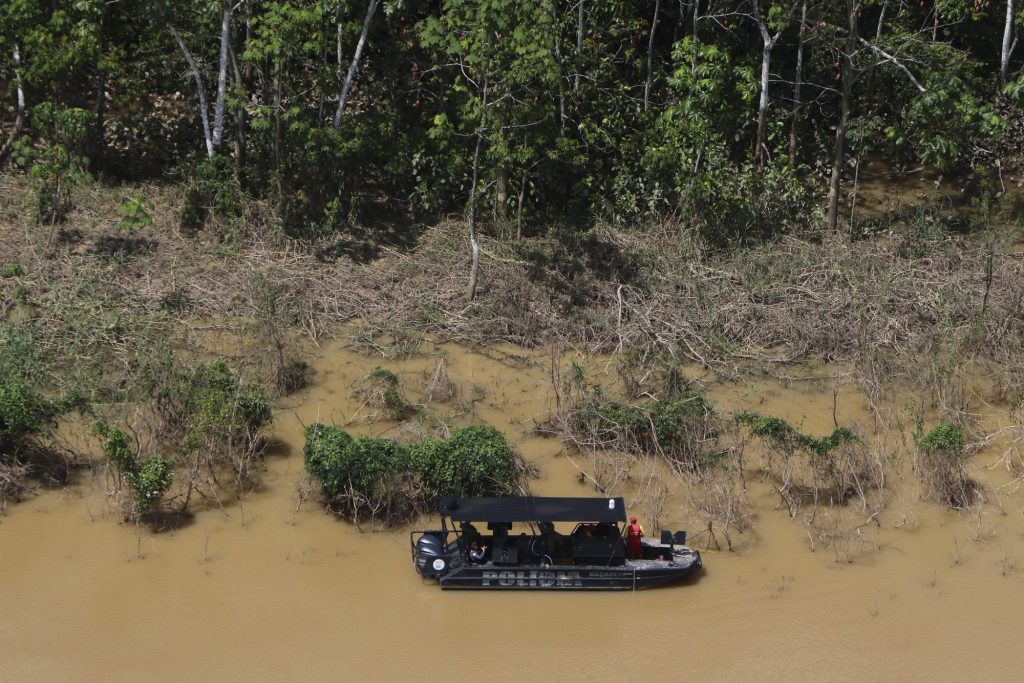 
Brazil search teams found possible human remains in their hunt for a British journalist and indigenous expert as the suspect’s family professed his innocence in the case.

Dom Phillips, who was a regular contributor to the Guardian and Washington Post, and Bruno Pereira were last seen Sunday in the Sao Rafael region of the Amazon rainforest where they disappeared after passing through a lawless region by boat.

This week’s developments saw police find traces of blood on a boat belonging to local resident Amarildo da Costa, who is considered the main suspect in the pair’s disappearance.

Now, experts will investigate the “organic material” found in a river near the town of Atalaia do Norte in the Amazon rainforest, in what may be the biggest break yet for the five-day investigation.

A Brazilian judge ordered suspect da Costa, who was this week charged with illegal possession of restricted ammunition, to be held for another 30 days while police investigate his involvement in the case.

As the search for the two missing men heightened, Brazilian officials deployed more than 150 soldiers in camouflaged trucks to the town of Atalaia do Norte to interview locals.

By Friday, officials deployed soldiers in riverboats to inspect the nearby waters.

Costa’s lawyers and family said he fished legally on the river and professed his innocence to the police.

Police say he was one of the last people to see the two missing individuals, and suspect he was involved in illegal fishing for a buyer in Peru.

Da Costa’s family members claimed police were torturing him to try to force a confession.

Fellow fisherman Osenei da Costa de Oliveira, 41, said Friday his brother was arrested at home before being taken to jail.

“Then they put him on a boat under the sun and began to travel to Atalaia do Norte,” da Costa de Oliveira said.

“When they reached the Curupira rivulet, they put him on another boat. Then they beat him, tortured him, put his head under water, stepped on his leg and pepper-sprayed his face. They also drugged him twice, but I don’t know what they used.”

“They wanted him to confess but he’s innocent,” he added.

The suspect’s mother, Maria de Fátima da Costa, remembered seeing her handcuffed son arrive at a nearby port with police, saying he could barely walk on his own and was soaking wet.

“I told the police he was not a criminal to be treated like that,” she said.

Proclaiming her son’s innocence, the suspect’s mother said the traces of blood police found on his boat could belong to a pig he slaughtered a few days before his arrest.

The blood stains are now being analyzed by lab experts.

In a desperate bid to rid da Costa of accusations, his family slammed the claim he was armed and flashed a gun at Phillips and Pereira.

The suspect’s father-in-law, Francisco Conceição de Freitas, said da Costa — also known as “Pelado” in his community — waved an oar, not a rifle, at the two men just one day before they vanished because he felt “threatened” by them.

De Freitas claimed the watchmen were armed, adding that da Costa wanted to make it seem as though he was also carrying weapons.

The family said da Costa doesn’t have a criminal record and his only previous run-in with the law for being detained for a few hours after police falsely suspected he was transporting drugs.

On Thursday, officials said a forensic officer and state police were checking for “possible genetic material” on the boat containing blood to see if it belonged to a human or an animal.

Police investigated six other people in connection with Phillips and Pereira’s disappearance.

Pereira — who recently received threats over his work combating illegal fishing — and Phillips, were on a reporting trip in the Javari Valley, a remote jungle area near the Peruvian and Colombian border, when they disappeared.

The region often sees illegal hunters and fishermen pass through, according to police.

Phillips, who has reported from Brazil for more than a decade, has been working on a book about the preservation of the Amazon.

Phillips has also contributed to the Washington Post and New York Times. He currently resides in Salvador, a city in Brazil’s Bahia state, with his wife, Alessandra Sampaio.

Actor Mark Ruffalo, soccer legend Pelé, and US President Joe Biden are among the notable names urging the Brazilian government to intensify efforts to find the men.