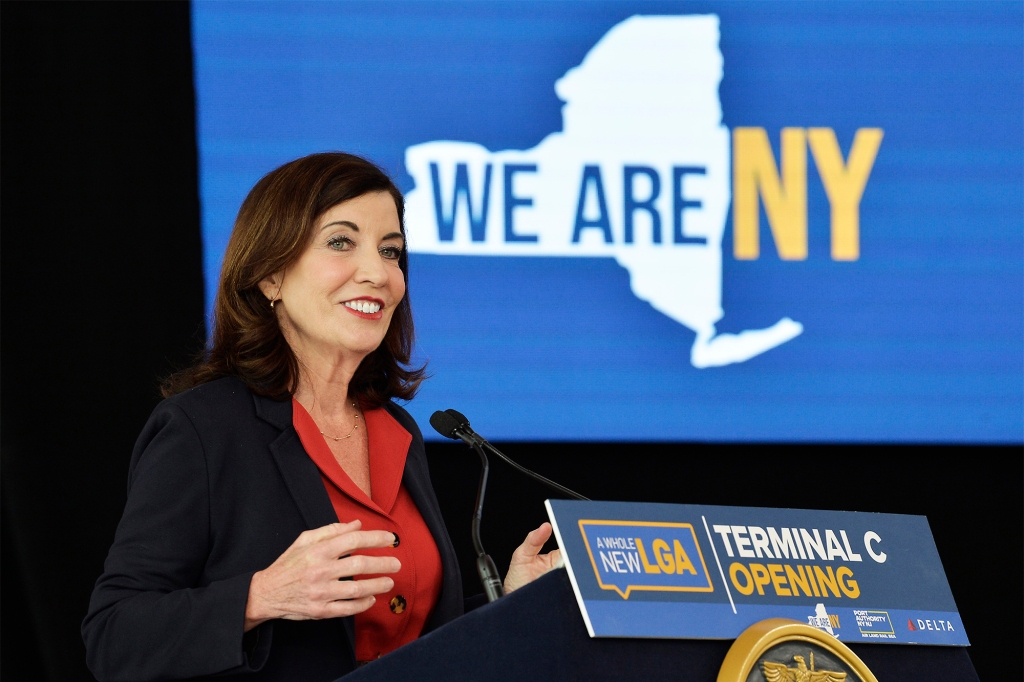 
How suite it is.

Gov. Kathy Hochul had the state shell out $2 million to provide herself a spacious state-of-the-art executive office in a Buffalo building whose landlord is a big campaign contributor, according to documents obtained by The Post.

Hochul’s ramped-up new digs in her hometown include access to a balcony, a snazzy mural called “Go!” painted on one side of the building and a rooftop garden, published reports have said.

“When she became governor, she ordered that her office be made bigger by taking down a wall and that she be given access to a balcony,” said a source familiar with the office expansion.

The extensive renovations on the fifth floor of the mixed-use building at 95 Perry St. in Buffalo’s historic Cobblestone District began shortly after Hochul replaced tarnished Andrew Cuomo as governor in August and continued through this past April, records show.

She is heavily favored to win the Democratic primary on June 28 and face off against a Republican in five months.

Developer Samuel Savarino of Savino Companies — who built, owns and manages the renovated warehouse — has donated $62,500 to Hochul’s campaign kitty. The majority of that dough, or $37,500, was contributed after Hochul became governor, according to her campaign records filed with the state Board of Elections.

Hochul, who was born and bred in Buffalo and lives there, used the same building for a much smaller office when she was lieutenant governor, sources said.

Her public schedule since becoming governor shows she has spent about 12 days in Buffalo, mainly in aftermath of the horrific shooting massacre there last month.

Neither Cuomo nor his gubernatorial predecessor, George Pataki, had a third office in addition to the ones they had in the state Capitol building in Albany and the governor’s traditional New York City office on Third Avenue in Manhattan.

“It absolutely reeks and should be investigated,” state Republican Party Chairman Nick Langworthy seethed to The Post of the situation.

“[She] has reneged on her promise that an ‘ethical government would be a hallmark’ of her administration,” Suozzi said.

The “executive chamber renovation” project was paid by the Empire State Development Corp., the chief state leaseholder for office space in the building.

A breakdown of the spending on the renovations at the leased building includes:

The total value or cost with change orders comes in at $2,002,831.42, according to invoices filed by the contractor and subcontractors.

The Hochul administration claims the renovations and expansion were done mainly for security purposes, not for “convenience or luxury.

“For the safety and security of the Governor, renovations were made to one floor of a building that is leased by Empire State Development,” ESD said in a statement. “All work was done in accordance with State Police requirements to ensure the well-being of the Governor when working in Western New York.”

But the ESD also said the renovations were done to accommodate the need for additional executive staff as well as security personnel, in addition to other security measures and upgrades.

The agency added that the balcony has been a feature of the building since 2008, when the economic development agency first leased space there and that the offices located near it were not altered to create greater access for the governor.

The State Police also issued a statement saying it “conducted a review of existing facilities and determined that changes were required to support the security needs of the Governor.

“These were not changes for convenience or luxury, but were vital upgrades to protect the safety and security of the Governor as deemed necessary by State Police,” the statement said.

The Office of General Services, responsible for handling leases for state agencies, said in a separate statement that it is reimbursing ESD for the cost of renovations for upgrades “necessary for security reasons related to the Governor’s occupancy.”