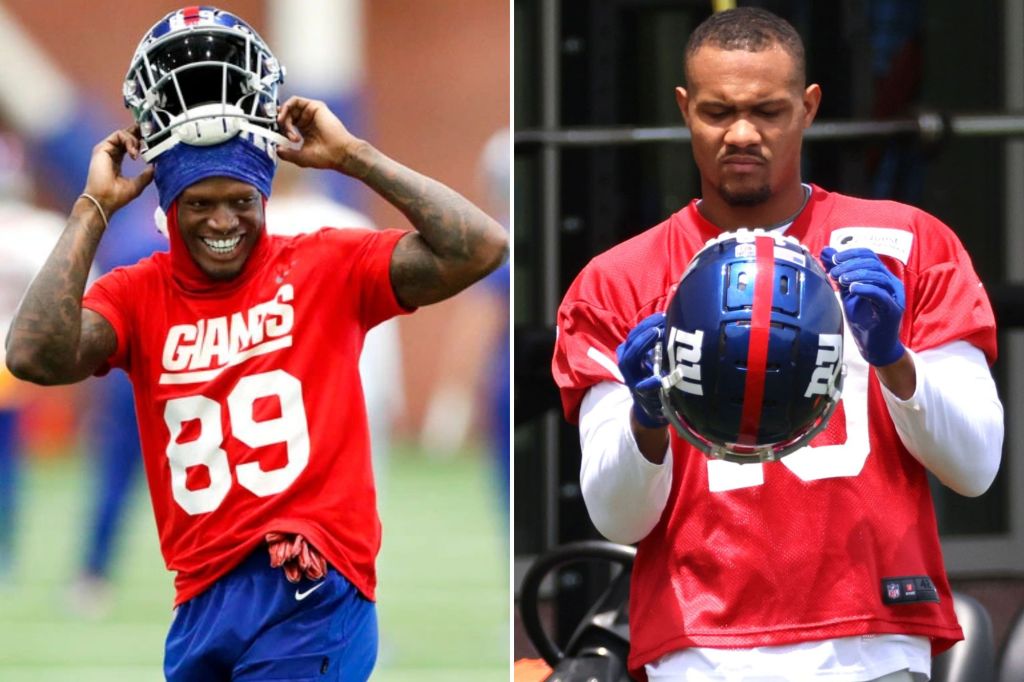 Then, and now, Kadarius Toney and Kenny Golladay do not have a single touchdown reception.

Last season, the lack of productivity from this wide receiver duo was a sign of just how dysfunctional and miserable the offensive output was. This spring, seeing Toney and Golladay wearing red “non-contact’’ jerseys and not participating in any real work on the field is not a disaster but it is disconcerting.

Through the 10 organized team activity practices, Toney and Golladay wore red. They did so again on Tuesday for the start of the three-day mandatory minicamp. There is no expectation at all that either receiver will shed the red jersey the next two days. And so, check back on this the final week of July, when the Giants reconvene for training camp. If Toney and Golladay are not on the field and ready to roll, something is not right.

The line from the Giants is that there is nothing seriously wrong with either player. Golladay’s issue is undisclosed. Toney is believed to have something going on with his knee, which is one of the few body parts that functioned at a high level in his rookie year, as he missed six games in 2021 with an assortment of maladies: Hamstring, ankle, thumb, quad, oblique, shoulder and two positive tests for COVID-19. You name it, Toney pretty much aggravated it.

Golladay missed plenty of practice time in his first year with the Giants after signing a four-year, $72 million contract. He was able to start 14 games and was rarely effective. He was targeted 76 times and came away with only 37 receptions for 521 yards. Toney in his 10 games was targeted 57 times and managed to haul in only 39 passes for 420 yards.

When the Giants went to their team period in their first minicamp session, Daniel Jones completed his first passes to David Sills and Richie James. Jones overthrew Darius Slayton and then connected with Travis Toivonen. These are not the passing options for Jones that new head coach Brian Daboll and offensive coordinator Mike Kafka want to take into the season opener in Nashville, more than three months from now.

That is a long way away but it is never too early to wonder if the best-laid plans will come to fruition. Sterling Shepard is also wearing a red jersey but he is coming off a torn Achilles tendon and will undoubtedly start the season on injured reserve. Golladay and Toney were supposed to be healed and ready to make amends for what they put on the field in 2021. So far, nothing much.

“You would love for everybody to be out here, particularly the skill guys to get reps with the quarterback, but that doesn’t happen usually in most places. There is always some guy dinged up or you’re giving them an off day. We’ll get plenty in the summer here.

“They’ve all been in the walk-throughs and been getting their reps, they’re working, and they will be ready as soon as they’re ready. And when they are, we’ll get as many reps as we can.’’

Golladay, 28, is a veteran and earlier this spring he admitted, “Once we got a whole new coaching staff and everything, I definitely kind of just flushed [his 2021 season] and focused on let’s start something new, turn the page now.’’ His time to turn the page will come only after he is cleared to practice on a full-time basis.

Toney, taken with the No. 20 overall pick in the 2021 NFL Draft, missed so much practice time as a rookie that it was difficult for him to get in sync with Jones. That sync did not develop during this offseason cycle, as Toney was not around the program for the first two weeks and, since his arrival, has been relegated to certain drills off on the side.

“One of the things this offense does well is the ability to move guys around and put guys in different spots. Once he gets on the field we’ll be able to see that and he gives us a special element.’’

It is an element that will have to wait, at least until late July, to surface.