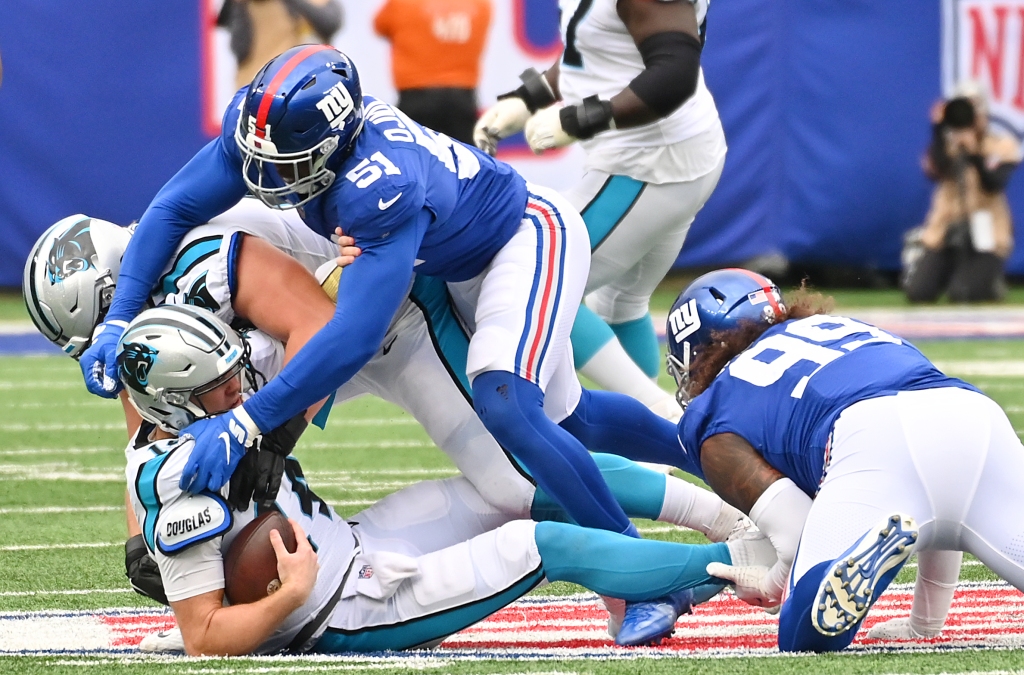 Giants’ Azeez Ojulari is bulked up after rookie year: ‘Hulk’


Of course there is a dress code — albeit a not-very-restrictive one — around the Giants’ facility, to which all players must adhere: Wear team-issued gear while in the building working out. That is about it, as far as guidelines set down by new head coach Brian Daboll.

As a young and by-the-book second year player, Azeez Ojulari has no problem complying with this requirement. Even though his position coach wonders why he adheres to any of this.

“If I looked like that I don’t know if I’d ever wear a shirt,’’ outside linebackers coach Drew Wilkins said recently.

Jersey No. 51 fits Ojulari a bit more snugly now, as he has bulked up to 255 pounds chiseled into his 6-foot-3 frame, up around 10 pounds from his rookie weight of 245 — though he remains listed on the team’s official roster at 240 pounds. Bigger is not always better, and the Giants did not ask Ojulari to return with added pounds for his second offseason program. He pumped himself up on his own, showing he was not content with his rookie output, when he led the team in 2021 with eight sacks.

“I feel like as a rusher you’ve got to have some type of power with you when you rush,’’ Ojulari said. “You can’t just always go speed. These tackles nowadays are so athletic and good, everyone is very professional. So you’ve got to add — you’ve got to switch it up a little bit. We’re in the NFL, so everyone is going to be big and strong, so it’s just that little niche, what you can do to get yourself a little ahead.’’

The new coaching staff figures to benefit from a bigger and stronger Ojulari. Without any significant help on the other side of the defense, Ojulari at times was like a one-man band on the edge as a pass rusher. He played in all 17 games (13 starts), and his sacks were mostly accumulated with relentless hustle rather than flat-out beating the offensive lineman across from him with a quick strike. The analysts at Pro Football Focus were not taken with Oljuari’s performance in his first NFL season, grading him out as No. 83 among all edge defenders.

There is every reason to believe Ojulari will improve with more experience, more support around him and, now, more size and power to utilize.

“When we got here in February, watching him on tape, you realized this is a guy who had an exciting, big year in year one,’’ said Wilkins, who arrived from the Ravens, along with new defensive coordinator Wink Martindale. “But then he comes in and he looks like the Incredible Hulk and you recognize this is a guy who put in work from the time that great season ended until he came back here.

“It’s a really great player to work with. Just the little things in his pass rush, like his footwork, his hand placement, his get-off, these are things he’s really buying into right now, the little details of it that can take his game to the next level.’’

The Giants want to believe the selection of Evan Neal with the No. 7-overall pick in the draft, to pair with Andrew Thomas secures the offensive tackle spots for the foreseeable future. That same belief is present with the addition of Kayvon Thibodeaux, taken at No. 5 overall, providing Ojulari with a running mate as edge rushers for years to come.

At 6-foot-5 and 258 pounds, Thibodeaux is taller and a bit leaner than Ojulari. Both have plenty of size, though, and this is far from coincidental.

“I always say there’s a good place for a small person,’’ Martindale said. “It’s behind a big, long person in this league.’’

Thibodeaux in his brief time with the Giants has already put on display his electric personality and gift of gab. Ojulari is quite the opposite. His media sessions are cordial and quick, as the former Georgia defender, a second-round pick in 2021, expands on little and manages to answer questions with as few words as possible.

Ojulari said he was excited to see the Giants take Thibodeaux.

“I was like, man, bring him on, let’s work, because I know how elite he is and how good of a player he is, so why not?’’ Ojulari said. “He’s a great dude, so I was just happy to have him. He’s explosive for sure, a great athlete, too. Just can’t wait to keep playing with him and getting better every day with him.’’

Wilkins said Ojulari has “an A-plus personality’’ even though he is far more reserved than the gregarious Thibodeaux. The one trait the Giants need these two youngsters — both 21 years old — to share, most of all, is an ability to put the opposing quarterback on his back.