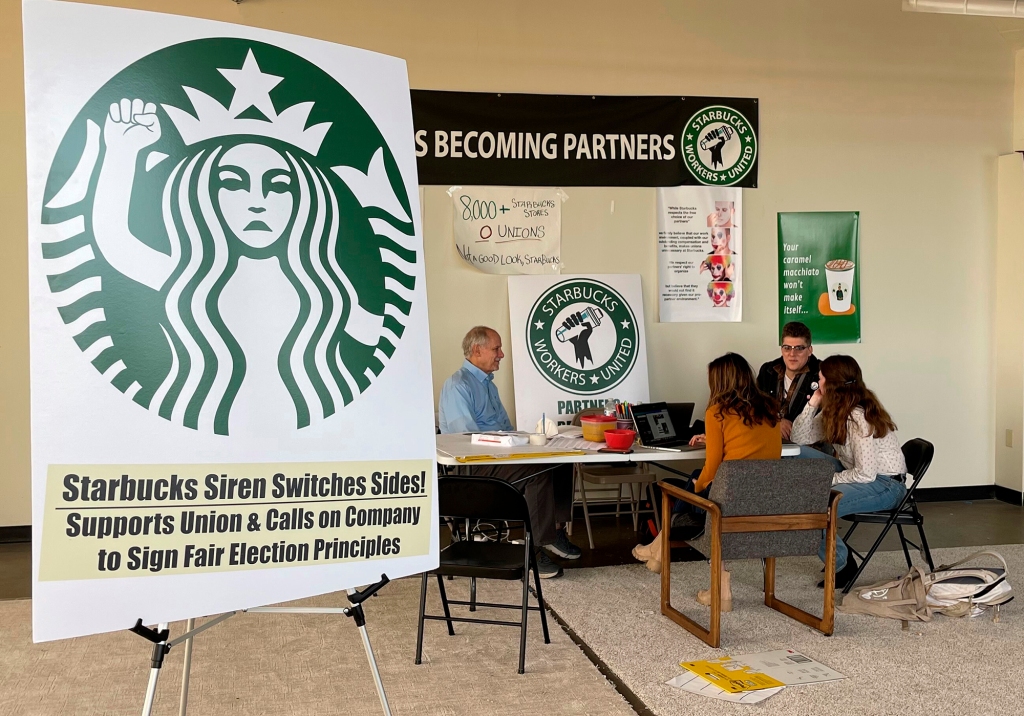 
Employees at one of three recently unionized Starbucks in Ithaca, NY, say they find it more than coincidental that the company has decided to close their store just two months later.

Though the coffee giant denies the College Avenue store closure has anything to do with the location’s union formation, the employees — “partners,” as they’re called within the company — are convinced that they’re being punished for their campaign for fair treatment in the workplace.

Nadia Vitek, a College Avenue barista and partner contact for Starbucks Workers United at that location, told The Post: “There is no way [the store closing] isn’t retaliation.

“Their goal here is to intimidate partners across the country by sending a message that this is the consequence for unionizing.”

The union was told on June 3 that the store, located just off the Cornell University campus, would be shutting down for good on June 10.

A spokesman for Starbucks told The Post: “The store has experienced facilities issues, in addition to time and attendance and staffing issues that made it difficult to operate successfully.”

But employees are pushing back on that reasoning.

“The ‘facility issue’ he’s referring to was an above-ground grease trap that overflowed in April,” Evan Sunshine, a barista at the College Avenue Starbucks, told The Post. He alleged that the decades-old trap pre-dated Starbucks moving into the space and said the location’s partners had asked Starbucks executives to clean up the potentially toxic mess. “They didn’t actually hire a technician to clean it until we went on a day-long strike.”

Sunshine, one of the union organizers, called for the walkout. “Starbucks Workers United is pretty decentralized, so each store has their own jurisdiction over things like this,” he said.

As for the time, attendance and staffing problems, Sunshine noted that, after the partners won their vote to unionize in April, Starbucks moved the store’s closing time from 10 p.m. to 7 p.m. and then 2 p.m.

“They changed the hours, making it so that about half of the employees, who are students at Cornell, aren’t able to work a full shift,” he said. “They created the issue that they’re citing as a reason the store should close.”

“[The change in hours] certainly seems retaliatory considering it happened after our strike,” Sunshine said.

“In many cases, staffing issues can be the cause [of shortened hours],” the Starbucks spokesman said. “We don’t want partners burning out.”

The spokesman added that the union for the College Avenue store was warned of the closure prior to the July 3 meeting, as “is required by law.”

As the partner contact for the College Avenue Starbucks Workers United, Vitek was a part of that meeting, which took place on Microsoft Teams and included lawyers, Starbucks executives and union representatives.

“Us being informed of the closure ahead of the Friday meeting is a lie,” Vitek said. The meeting was scheduled for 4 p.m. that day. Vitek said that, at 4:02, a third-party attorney representing Starbucks sent an email breaking the news about the College Avenue store. Eight minutes after that, Starbucks executives and lawyers belatedly joined the meeting.

That email, Vitek said, can’t be considered fair warning to the union “because the email was sent after the meeting was supposed to start.”

Former and interim CEO Howard Schultz admittedly isn’t a fan of unions. He told NPR in April that “companies throughout the country [are] being assaulted, in many ways, by the threat of unionization.”

On June 7, the same group of union representatives, lawyers from the earlier meeting and Starbucks’ team of a partner resources delegate and a regional director joined a two-hour video call to bargain.

According to the Starbucks representative, the coffee chain “is in negotiation per NLRB rules” for relocating the College Avenue partners to other locations in Ithaca, which are also unionized.

“[The union] really expecting to accomplish anything on this call,” Vitek said. “But we did learn that if we don’t come to an agreement by [June 10], exactly one week after they told us about the closure, our jobs are in limbo and we may not be transferred to another store.”

And Vitek is not worried about the city’s other unionized locations shutting down: “I don’t think Starbucks would dare do that. I think they were just trying to make an example out of us.”