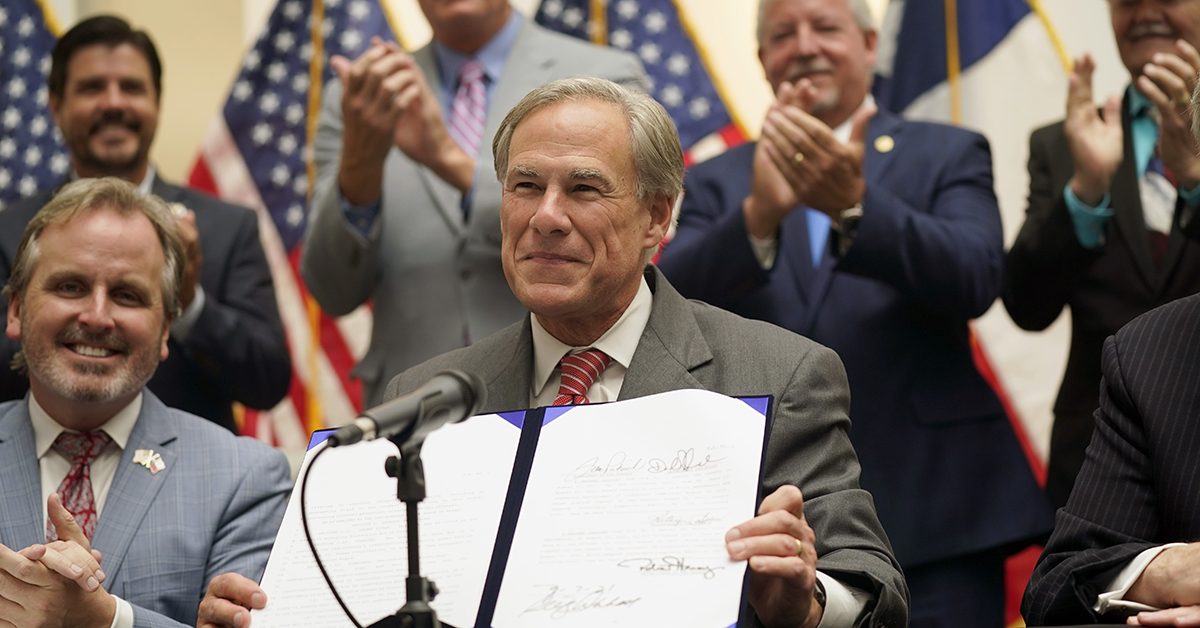 The state of Texas has finally passed its new election bill and it has officially been signed into law by Republican Gov. Greg Abbott.

It comes months after some Democrats in the Texas House of Representatives fled the state in an attempt to prevent a quorum and stop the bill from being passed, The Texas Tribune reported.

SB 1 is set to take effect three months after the special legislative session, in time for the 2022 primary elections. But it could still be caught up in the federal courts. Abbott’s signature was preempted by two federal lawsuits.

While SB 1 makes some changes that could expand access, namely increasing early voting hours in smaller, mostly Republican counties, the new law otherwise restricts how and when voters cast ballots. It specifically targets voting initiatives used by diverse, Democratic Harris County, the state’s most populous, by banning overnight early voting hours and drive-thru voting — both of which proved popular among voters of color last year.

The new law will also ratchet up voting-by-mail rules in a state where the option is already significantly limited, give partisan poll watchers increased autonomy inside polling places by granting them free movement and set new rules — and criminal penalties — for voter assistance. It also makes it a state jail felony for local election officials to proactively distribute applications for mail-in ballots, even if they are providing them to voters who automatically qualify to vote by mail or groups helping get out of the vote.

As Abbott signed the legislation on Tuesday he celebrated and defended what the law means to Texas and Texans.

“One thing that all Texans can agree [on] and that is that we must have trust and confidence in our elections. The bill that I’m about to sign helps to achieve that goal,” he said before he signed the legislation. “The law does however make it harder for fraudulent votes to be cast.”

“It does make it easier than ever before for anybody to go cast a ballot. It does also, however, make sure it is harder than ever for people to cheat at the ballot box,” he said.

The move comes weeks after Texas Democrats appeared to give up the fight and came back to do their jobs following the state Supreme Court ruling that they could be arrested.

In August, the court decided that the Democrat lawmakers who have fled from the legislature in order for it to not meet quorum can be arrested and brought back to the state Capitol, CNN reported.

The Texas Supreme Court has ruled that the state House may compel the attendance of its members by civil arrest, overturning a lower court order from earlier this month.

The state House speaker last week signed 52 civil arrest warrants for Democrats who are absent without excuse. The sergeant-at-arms last week sent the warrants to those Democrats, deputized law enforcement to find them, and even dropped paperwork off at some members’ homes, though no arrests have been made.

“The question now before this Court is not whether it is a good idea for the Texas House of Representatives to arrest absent members to compel a quorum. Nor is the question whether the proposed voting legislation giving rise to this dispute is desirable,” Justice Jimmy Blacklock said in Tuesday’s decision.

“Those are political questions far outside the scope of the judicial function. The legal question before this Court concerns only whether the Texas Constitution gives the House of Representatives the authority to physically compel the attendance of absent members. We conclude that it does, and we, therefore, direct the district court to withdraw” the temporary restraining order,” Blacklock added.

“The district court very clearly abused its discretion by issuing the TRO. The defendants have no adequate appellate remedy,” he said.