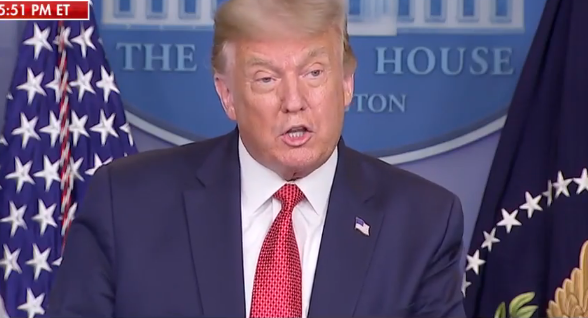 Former President Donald Trump said if he runs for president in 2024, then he could jump into the GOP nomination race and tap a running mate “right after” the midterm elections next year.

Mr. Trump is teasing the idea of making a political comeback in the 2024 presidential election.

“I am giving it the most serious consideration, as you can imagine,” Mr. Trump said Wednesday on “The Dan Bongino Show.” “If you do it, I think probably the most appropriate time would be right after the ‘22 election.”

In the interview, Mr. Trump said President Biden has made a mess of the U.S.-Mexico border and the administration’s push to raise the corporate tax will send companies fleeing to more tax-friendly nations.

Mr. Trump said Mr. Biden is getting the credit for the work he did to pave the way for COVID-19 vaccines.

Mr. Trump said the United States “probably would have never had a vaccine” if it were not for his leadership, and he said the rollout of the vaccines was delayed to hurt his election chances.

The former president also restated his widely disputed claim that the 2020 election was stolen.

As for his latest poll numbers, Mr. Trump said, “No one has seen anything more positive,” and he’s staying politically engaged as GOP candidates seek out his endorsement.

“Everyone comes, and they all want the endorsement more than they have ever wanted an endorsement,” Mr. Trump said. “It has never been an endorsement that meant so much, which is an honor to me, and it is very important.”

“It means victory, it is the difference between whether they win, or they lose,” he said.

Advertisement
In this article:Donald Trump, Featured