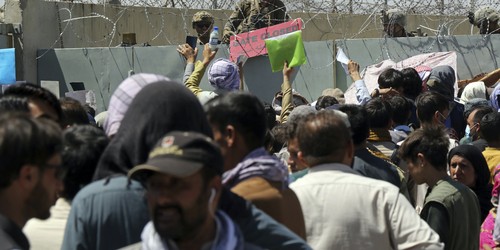 Rep. Markwayne Mullin (R-OK) recently attempted to travel to Afghanistan in order to aid Americans still trapped there. He explained the details during an interview with Fox News’ Bret Baier which aired Friday during “Special Report,” as he told his side of the story.

Many great Americans, former military and others, have stepped up to help out stranded brothers and sisters abandoned in Afghanistan by this Administration. Thank you @BretBaier for allowing me to tell my small part of the story.

“Well, I want to make it very clear. I wasn’t looking to try to get in Afghanistan,” Mullin began with. “That wasn’t what was this thing started out to be.” Rather, he was receiving calls as part of an effort to get people out of Afghanistan.

As the congressman described it, nobody else would sponsor a flight for Americans to get out, so he was asked to do so.

“A congressman can sponsor a flight going in,” Mullin explained, “and it gives one of these other departments cover because it’s kind of, no one wants to touch it because I personally believe it was because they knew this was a hot mess.”

Rep. Mullin affirmed he “wasn’t trying to go over there and be a cowboy or anything like that,” and later said during the interview that he “never pretended to be Rambo.” As he assured Baier, “everybody kept denying them and then they asked would you go with us? And these are Tier 1 operators. These are DELTA guys, special forces. These guys are legit. I’m nobody. I’m just a congressman.” Mullin did offer during the interview though that he was there for logistical assistance.

They got a humanitarian flight plan from FAA “and everything was good to go.” Ultimately, however, their flight had to keep circling the Hamid Karzai International Airport in Kabul because their requests to land were repeatedly denied.

While Mullin doesn’t know who prevented them from landing, he does “think it was 100 percent directed from the State Department.”

The congressman also pushed back against reports that he went to Tajikistan, saying “I never went” and “that is absolutely false.” He also noted “a lot of misinformation was going out about that.”

Mullin did acknowledge though that he sought help from the U.S. ambassador there, John Mark Pommersheim, as he was coming in with large amounts of money, and asked the ambassador about the requirements for doing so. Rep. Mullin emphasized that they had to go through 16 checkpoints, where they would be charged to get through.

The ambassador told Mullin he “was told not to” help, though.

Later in the interview Mullin warned Baier that “at some point they are going to lose patience and aren’t going to let us keep driving past checkpoints and paying them off,” which is regarded as “a tax.”

The congressman was firm in his beliefs about how much the administration has been lying. He called it “a boldfaced, 100 percent lie” that President Biden, the State Department, and the general said they would get everyone out of there who wanted to. Mullin’s evidence is that he was speaking with people who still wanted to get out.

“Well, we’re not handling our mess. It’s our mess. I don’t care which way you think about it. It’s our mess. The United States created this vacuum to allow the Taliban to come in. President Biden and his horrific withdrawal has caused this to happen,” Mullin said.

Rep. Mullin spoke of planes at the airport which are attempting to get people out, but which don’t have clearance, and that the State Department’s response was that they do not have control of the airspace. As Landon and Leah have reported, the situation is looking even more like a hostage crisis.

“Here we are the United States government and we are negotiating with the Taliban to get American citizens out and then the president of the United States is going to go to the mic and say that every American that wanted out got out? I have a list of 50 that want out that they haven’t got out. I have a list of 50 that we’ve ran out of Kabul and put in safe houses around Afghanistan that I promise you they wanted out,” Mullin said.

The congressman acknowledged the dangers, but he chalks that up to the president’s failures forcing him to go. Mullin paused, as he offered up to Baier that while some people will get out, he promised that some will die “because of the failure from President Biden.”

A consistent theme from Mullin throughout the interview was that he had to do something.

“How do you say no? I mean, how do you say no when you have the opportunity to do something,” the congressman said, also acknowledging his wife and children weren’t happy with him going, and that they felt on the plane they had a 50/50 chance of coming back.

Rep. Mullin, who said “absolutely not” when asked if he had regrets, reaffirmed he “would do it again tomorrow” and would go “without hesitation.”

A happy update has come since the interview aired, however. On Monday morning, the congressman announced over Twitter that a young woman named Mariam and her three children–all American citizens–made it out of Afghanistan.

Mariam had gone to visit her parents for the first time with the kids and became trapped in Kabul when the Taliban overran the city. We left two weeks ago today to get her, the children, and others out. — Markwayne Mullin (@RepMullin)

This morning at 05:32EDT they got out of Afghanistan. Praise the Lord! — Markwayne Mullin (@RepMullin)

There are still many families like Mariam’s who are desperately wanting and waiting to get out. America cannot rest until we get them all home. — Markwayne Mullin (@RepMullin)

Before the troops had been withdrawn from Afghanistan, Reps. Peter Meijer (R-MI) and Seth Moulton (D-MA) had traveled to Afghanistan to asses the situation. Meijer and Moulton, unlike Mullin, have military experience.

Both majority and minority leadership have spoken out against such trips, as has the Pentagon.