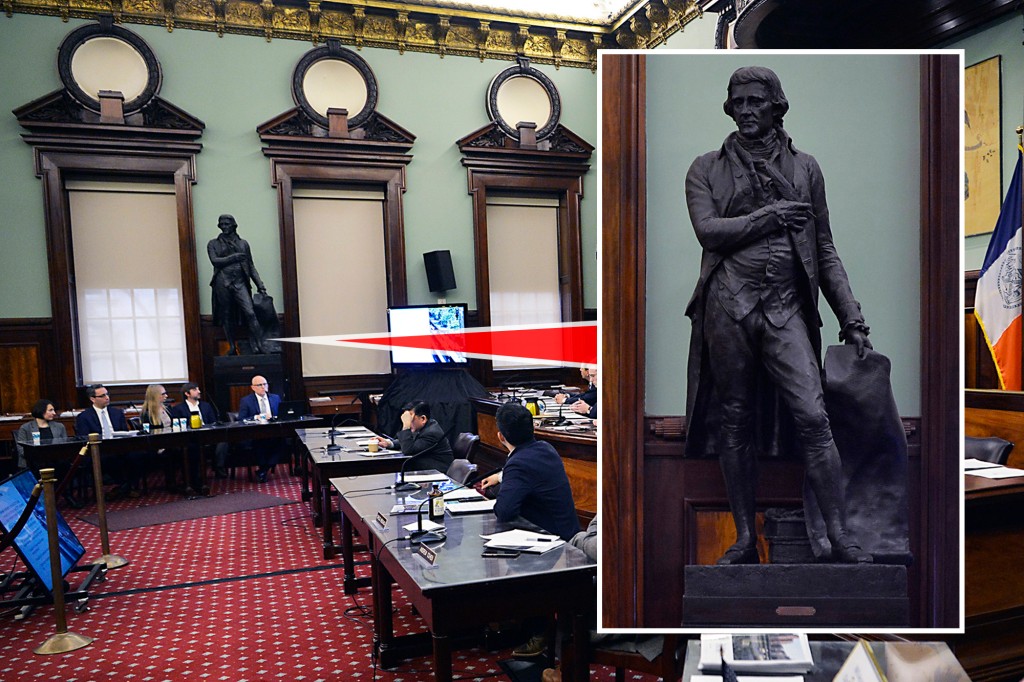 This Founding Father will no longer be in “the room where it happens” — thanks to Bill de Blasio.

The mayor, who has just three months left in office, is quietly banishing a statue of Thomas Jefferson from City Hall’s Council chambers — where it has resided for the past 187 years, The Post has learned.

The city’s Public Design Commission — comprised of mayoral appointees — has listed “the long term loan” of the 1833 painted plaster statue of the Declaration of Independence author to the New-York Historical Society on its “consent” agenda for Monday.

Meanwhile, a replica of the statue by sculptor Pierre-Jean David is still on display in the Capitol Rotunda in Washington, DC.

The terms of the loan to the historical society for the Jefferson, which was gifted to City Hall by naval officer and Jefferson admirer Uriah Phillips Levy in 1834, are still being negotiated. But Councilman I. Daneek Miller (D-Queens), who’s been pushing to boot Jefferson, said the loan is “indefinite.”

Miller said he expects the statue to be gone by Oct. 21, the City Council’s next body-wide meeting.

At least one council member wasn’t pleased with Jefferson’s banishment.

“The de Blasio administration will continue the progressive war on history as he, himself, fades away into a portrait on a City Hall wall,” Councilman Joe Borelli (R-Staten Island) told The Post.

“There’s so much about Thomas Jefferson and his own personal writings, memoirs about how he treated his slaves, his family members and things of that nature and how he perceived African Americans and slaves — that they lacked intelligence, that they were not to assimilate into society,” Miller told The Post.

“For us to really highlight such an individual is really not who we are as a council,” Miller said.