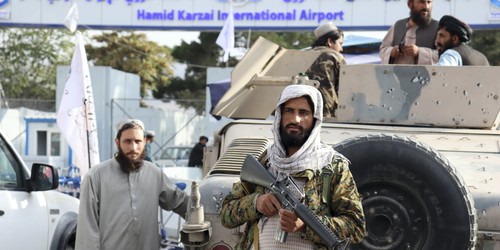 Rep. Jim Banks explained during a Fox News interview on Tuesday why he believes Democrats have “future plans” to send the Taliban aid.

“That’s why it’s time to name them as an international terror organization to block any effort by this administration, future administrations, even private citizens from financially aiding the Taliban in Afghanistan, that’s why the amendment matter,” Banks added.

But Democrats blocked the amendment “because I believe they have future plans to legitimize the Taliban government and reward them, give them money, give them supplies moving forward,” he claimed. “It appears Democrats are OK with legitimizing the Taliban.”

I submitted an amendment today that’d stop our $$ from going to the Taliban… But, just a little while ago, we got word that Dems blocked it.

Only one reason why Dems would do that: They have future plans to send them aid.@marthamaccallum pic.twitter.com/PAk1bcSLS7 — Jim Banks (@RepJimBanks)

According to Axios, the House Republicans’ proposed amendments to the National Defense Authorization Act are part of an effort to “attack the Biden administration and Democrats over the withdrawal from Afghanistan.”

The amendments are all meant to “increase the pressure on the Taliban, isolate their regime and tighten the screws economically,” a Republican Study Committee aide told Axios, which reported that all of the amendments “are expected to fail.”

Secretary of State Antony Blinken has said that the U.S. only worked with the Taliban out of necessity during the evacuation effort, but in the future, it will only do so to advance America’s “vital national interests.”

“The Taliban seeks international legitimacy and support. Our message is: any legitimacy and any support will have to be earned,” Blinken said Monday.