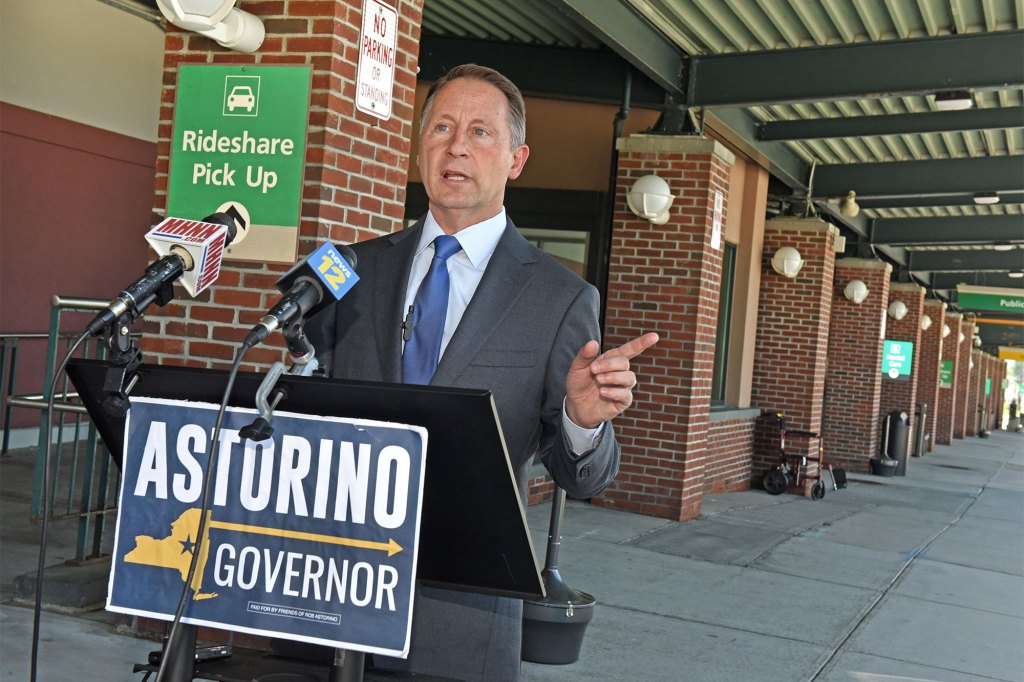 
Crime emerged as the major issue when New York’s Republican gubernatorial candidates squared off at their first televised debate Monday — with everyone vowing to fire Manhattan District Attorney Alvin Bragg over his progressive prosecution policies.

“You try to go into the city to have a good time with your family and everyone’s looking over your shoulder.”

Astorino said visitors would be “lucky” if they’re only “hit over the head with a bag of poop!” — invoking a disgusting subway incident before referencing a pair of other, far more violent attacks underground.

“I mean, that’s a good day going to the city now — and you might get hit with a hammer or shoved onto the train tracks.”

Andrew Giuliani — who appeared at the CBS New York event via video feed after refusing to produce proof that he’s been vaccinated against COVID-19 — said he wanted to revive the policies of his dad, former Mayor Rudy Giuliani, to fight crime in the city and across the state.

Giuliani said “we need to utilize programs” including “broken windows” and “stop, question and frisk” that he said drove down “2,000 murders a year in the early ‘90s to less than 600 murders a year just five short years later.”

“Are you saying we should go back to the programs that your father instituted,” co-moderator Marcia Kramer asked.

Harry Wilson, a wealthy corporate turnaround specialist from Westchester, said the crime problem — and the state’s controversial bail-reform law — resonated with him personally, as he revealed that a 77-year-old relative was fatally stabbed last week.

“My cousin’s father was murdered in his backyard,” he said, choking up.

“It was by a monster who’s out on cashless bail upstate, who had committed two assaults in recent weeks and set a fire in his backyard to draw him out, and then stabbed him to death on Thursday night.”

Front-runner Lee Zeldin, a four-term congressman from Long Island, said, “The hardest part of serving in elected office is going to a funeral, going to a wake, if someone who is dying too young in life, especially these NYPD funerals that we’ve gone through recently.”

“And you hear the family members speaking out, calling out elected officials and asking for action,” he said.

“Calling out Manhattan District Attorney Alvin Bragg, personally, by name,” he said, referring to the eulogy delivered by the widow of slain cop Jason Rivera earlier this year.

“You could tell how personal it is for these families.”

Zeldin and the three other GOP hopefuls all said they would fire the embattled DA if elected.

Hochul skipped the first Democratic debate on NY1 but took part in the second last week on CBS New York and came under attack from her rivals over her husband’s job with the concessionaire at the Buffalo Bills’ Highmark Stadium in upstate Orchard Park.

The football and concert venue is set to be replaced by a new stadium funded in part with $850 million in taxpayer money, including $600 million that Hochul added to the state’s $220 billion budget in April.

Most polls have shown Zeldin, 42, with large leads, although one last month had him trailing Giuliani, 36, by five percentage points.

The latest poll, released Monday by Emerson College, put Zeldin in first place with 34%, compared to 16% for Astorino, 15% for Wilson and 13% for Giuliani and 22% undecided.

But multimillionaire Wilson, 50, had the most campaign cash on hand — more than $4.2 million — as of late last month, according to filings with the state Board of Elections.

Veteran Marist College pollster Lee Miringoff has said that Monday’s debate was “very important” for the candidates because the Republican primary was “a tough race to handicap and right now it looks like a free-for-all.”

“But Republicans recognize they’re the smaller party in New York and this could be a Republican year nationally,” he added.

“The overriding issue is crime. New Yorkers don’t feel safe, and with good reason,” said Pataki, who served three terms from 1995 through 2006.

The state’s gubernatorial primary elections are scheduled for June 28, with early voting set to start on Saturday in New York City.

White nationalists Patriot Front are bailed out of jail