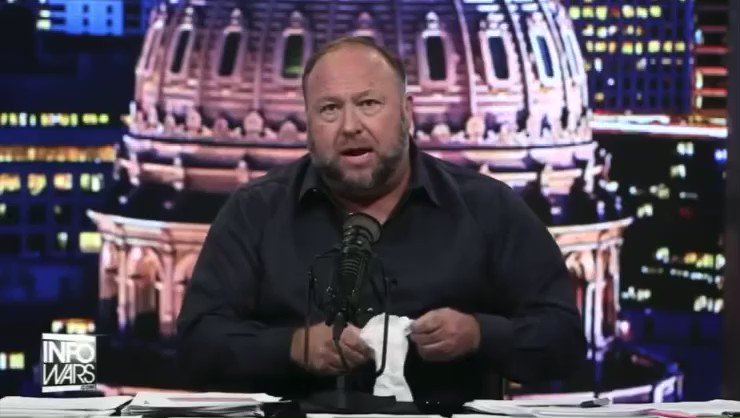 Conspiracy theorist Alex Jones said he was ingesting ivermectin and a steroid on-air on Friday during a rant.

Jones had the camera zoom in on two packages, one of which was 3 mg dosages of ivermectin and the other 4 mg doses of methylprednisolone.

Alex Jones reveals that he and his family have been taking ivermectin, and takes some live on air to prove it. Two things: 1. I’ve froze this frame-by-frame like the Zapruder film, and I think I’m seeing slight of hand. 2. His behavior after shouldn’t make anyone want to take it!

Advertisement
Related Topics:FeaturedivermectinVideoVideos
Up Next

ARTICLE: British health Workers say 43,000 people may have been given false negative for CoVID

On Monday, the Democrat select committee investigating the January 6 event on the US Capitol subpoenaed Alex Jones and longtime Trump adviser Roger Stone. The panel also issued subpoenas Monday for a current spokesperson for President Trump, Taylor Budowich, and for a couple who helped organize a January 6 rally, Dustin Stockton and Jennifer Lawrence.

Stone and Jones both gave speeches on January 5 at a rally in Freedom Plaza near the White House.

“This is nothing less than an epic struggle for the future of this country between dark and light, between the godly and godless, between good and evil,” Stone said at that event. “And we will win this fight or America will step off into a thousand years of darkness. We dare not fail. I don’t know how this is all going to end, but if they want to fight, they better believe they’ve got one,” Jones told the crowd.

For his part, Jones personally pledged more than $50,000 to help fund the January 6 rally, and helped to convince Julie Jenkins Fancelli, a prominent donor to the Trump campaign and heiress to the Publix Super Markets chain, to give about $300,000 to cover most of the cost of the event, the Wall Street Journal reported.

Both Jones and Stone were ultimately scratched from the list of speakers preceding Trump at the January 6 event. Stone left Washington without attending Trump’s speech. Jones joined demonstrators who marched toward the Capitol. The Justice Department in August charged a man who was standing next to Jones near the top of the stairs on the east side of the Capitol with entering a restricted area. Jones himself has not been charged. He has insisted that he urged members of the crowd outside the Capitol to remain peaceful, and he denied wrongdoing.