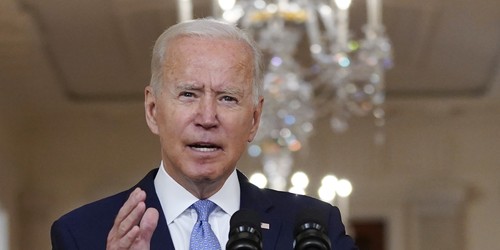 It was revealed this week the Afghan interpreter who helped saved then-Senator Joe Biden when he and a U.S. delegation were temporarily stranded in a remote valley after their helicopter was forced to land in a snowstorm in 2008 was left behind along with his family in Afghanistan.

Mohammed told Fox & Friends First on Thursday he fears for his life and the life of his family since the Taliban have been carrying out reprisals against those who worked for the U.S. or the former Afghan government.

“Yes, yes, they exit their forces from Afghanistan. They left me and my family and like me, the other people left behind. But it’s very scary, man, as we are under great risk,” Mohammed said.

“If [the Taliban] find me, they will kill me. It’s too easy. There are many as answers for them, but if they find me, attack me, or, for example, by my phone number as — or any kind of information, we will be killed. That’s too easy for them … I’m hiding in my house. I haven’t seen outside, what’s going on outside,” he continued.

As for his message for now-President Joe Biden, Mohammed begged for him to not forget about those who helped the U.S. when they needed assistance.

“Just I will tell him — hello, President, do not leave — do not forget me and my family. At the moment in Afghanistan, it is very hard and horrifying situation. All — and all those — and all voters in my country are zealots,” Mohammed said. “But there’s no escape from here to another area. But I’m also wondering how I’m going to get out from my house to somewhere else. Just give him my hello and tell him, if possible, tell him or send the message, to not let me and my family left behind. That’s OK.”

Mohammed appears to not be the only one who helped the U.S. military who was left behind when the U.S. pulled out of Afghanistan on August 31. Around 7,000 Special Immigrant Visa applicants were evacuated during the airlift but the State Department estimates a majority were unable to make it into Hamid Karzai International Airport.