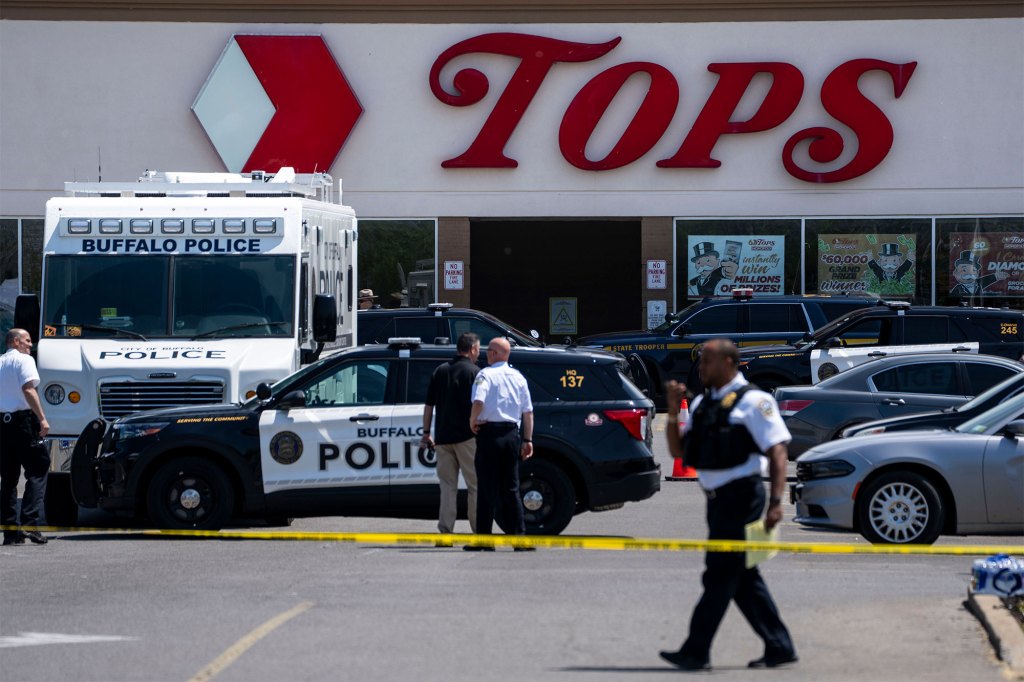 
The Erie County 911 dispatcher accused of hanging up on a Buffalo Tops Friendly Markets worker during last month’s mass shooting at the store has been fired, officials said.

The unidentified dispatcher had previously been placed on administrative leave for allegedly dropping the woman’s call as self-proclaimed white supremacist Payton Gendron, 18, allegedly murdered 10 Black people in a hate-fueled rampage at the supermarket on May 14.

County officials had confirmed the incident and promised “immediate action.” Erie County Executive Mark Poloncarz called the woman’s response to the emergency “inappropriate” and “unacceptable,” and pledged to terminate her.

Latisha Rogers, an assistant manager at the supermarket, told WGRZ she called 911 to report shots fired at the crowded supermarket when the dispatcher yelled at her over the phone before abruptly hanging up on her.

“I tried to call 911, and I was whispering because I could hear him close by,” Rogers told the outlet. “And when I whispered on the phone to 911, the dispatcher started yelling at me, saying, ‘Why are you whispering? You don’t have to whisper.’”

The dispatcher seemed unaware that Gendron was already inside the grocery store.

“And I’m trying to tell her, like, ‘Ma’am, he’s in the store, he’s shooting, it’s an active shooter, I’m scared for my life,’” she continued. “And she said something crazy to me and then she hung up in my face.”

Rogers said she then called her boyfriend and told him to call 911.

April Baskin, Chairwoman of the Erie County Legislature, told WIVB “it is obvious that that call was not handled in a professional way.” She said that the dispatcher’s full record was considered during the hearing in which she was fired.

Baskin and other county leaders said they plan a deeper investigation into the department after a similar incident occurred last week.

“We’re going to ask for further investigations into the full department because this happened more than once in the matter of two weeks on Buffalo’s East Side,” Baskin said.

During a birthday party for a surviving victim of the Tops shooting, a 911 call from the party to report that a woman had gone into cardiac arrest was dropped by a medical emergency dispatcher, according to WIVB. That dispatcher has since been fired.

“I have asked and Legislator [Howard] Johnson have asked for an investigation not just into that particular call taker and the ongoings of that call, but the entire department and identifying how many disconnections are happening,” Baskin said.

Recordings or transcripts of the Tops 911 call have not been released.

Rogers has worked at the Buffalo location for three years as part of a 13-year career with Tops Friendly Market, the Buffalo News reported. She said she doesn’t think she’ll be able to return to work at the supermarket — which has remained closed since the shooting — after living through such a “traumatic experience.”

Gendron appeared in court in Buffalo for a brief hearing on Thursday during which he pleaded not guilty to a new charge of domestic terrorism.

He is scheduled to appear in court next on July 7.

Gendron allegedly drove more than 200 miles from his hometown in Conklin, New York to Tops with an AR-15-style assault rifle and body armor with the intent to kill. He chose the Buffalo supermarket due to its location in a predominantly Black neighborhood, authorities said.

Before he opened fire, he posted documents online that revealed his white supremacist views and said he had been planning the attack for months. He said he was radicalized while bored at home during the pandemic.

He was taken into custody after the mass shooting and is being held without bail.

Those killed were between the ages of 32 to 86. Three others were wounded.